Since January, Kering and its Houses have carried out a growing number of initiatives to help in the fight against the Covid-19 pandemic, supporting medical staff and health institutions, along with those affected by the virus. Given the scale of the situation, the Group has been active in several regions, each time adapting its support to the local needs.

In China
In January, Kering and its Houses made a donation of 7.5 million RMB (about €1 million) to the Hubei Red Cross Foundation to help reduce the spread of the virus, through both preventive action and medical care.

In Italy
On March 11, as Italy faced a particularly challenging situation, the Group announced a donation of €2 million for the country’s four major foundation hospitals, based in Lombardy, Veneto, Tuscany and Lazio; four regions where the Group and its brands have a significant presence. The Group’s Italian Houses, along with those operating in Italy, all made a contribution: Gucci, Bottega Veneta, Saint Laurent, Balenciaga, Alexander McQueen, Brioni, Pomellato and Kering Eyewear.

On March 22, Gucci responded to an appeal by the regional authorities in Tuscany for companies in the fashion sector to start producing surgical masks and gowns for medical staff.
Gucci also launched two separate crowdfunding projects on March 26, supported by two further donations:

•    In Italy, €1 million was provided for the Civil Protection authority, in partnership with the Intesa Sanpaolo bank, to support the national health system.

•    At a global level, €1 million was donated to the World Health Organization’s Covid-19 Solidarity Response Fund via a Facebook campaign that aims to raise $10 million.

The Florence-based House has widely publicized the two campaigns, inviting the entire Gucci community to contribute, via the www.gucci.forfunding.it platform or its Instagram account, while also giving the WHO full access to its social media networks and their 70 million followers. 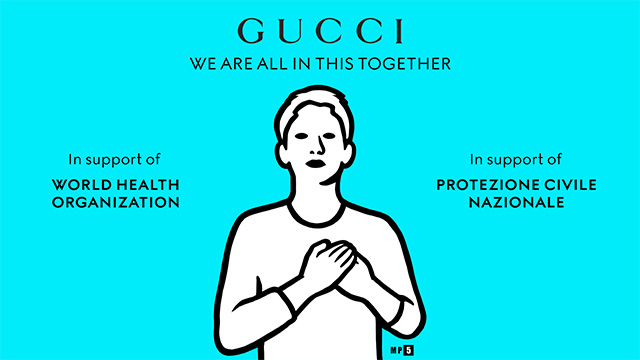 Bottega Veneta, another of the Group’s Italian Houses, is supporting medium- and long-term medical research in Italy by funding several scholarships at three research institutions: the Department of Cardiac, Thoracic, Vascular Sciences and Public Health of the University of Padua; the Virology Laboratory of the National Institute for Infectious Diseases Lazzaro Spallanzani in Rome; and the Microbiology and Virology Laboratory of the Hospital Domenico Cotugno in Naples. Meanwhile, the House has also taken part in two fundraising campaigns promoted by the Camera Nazionale della Moda Italiana and Altagamma for a total amount of €185,000. The donations to the Civil Protection Authority will provide ventilators and PPE for Italy’s health system.

Lastly, Brioni has launched the ‘Team Filo Rosso’ project to manufacture 30,000 face masks a week at its factory in Montebello di Bertona. The masks will be distributed according to the needs of communities and healthcare institutions in the Abruzzo region, including the two hospitals of Penne and Pescara. 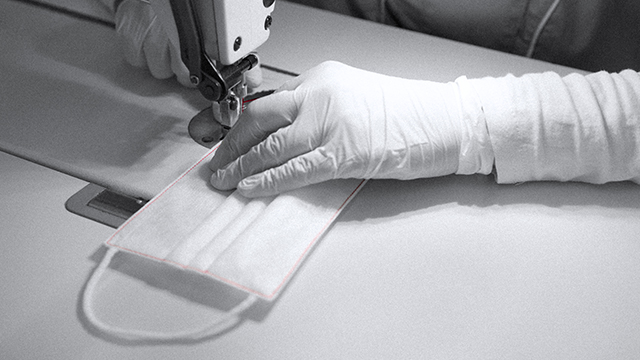 In France
On March 22, the Group announced the donation of 3 million surgical masks, purchased and imported from China, for France’s health services.
In addition, a financial donation was made to the Institut Pasteur to support research into Covid-19 and to help provide a lasting response to the current pandemic.

Kering has also financed the purchase of 60 3D printers by the AP-HP (Paris hospital authority) for the Cochin Hospital so that it can rapidly produce large quantities of protective equipment and medical components (face goggles, valves for artificial respirators, intubation material, masks, handles, etc.).
In addition, the Group has contributed to the #GardonsLeLien project as part of the Collective of companies for a more inclusive economy. This initiative aims to supply tablets, PCs and smartphones to the most isolated groups in society, and particularly elderly people in care homes and patients who have been separated from their loved ones. 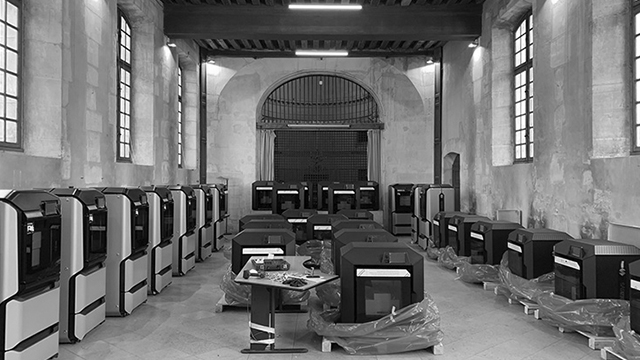 Lastly, Kering is also supporting the Paris Seine section of France’s Protection Civile, a voluntary association providing humanitarian and first aid. On a voluntary basis, employees from the Group are helping the association by making phone calls to elderly, isolated people during the lockdown period and creating a moment for togetherness, caring and listening.

Meanwhile, in parallel with the action carried out at Group level, the Balenciaga and Saint Laurent Houses have reorganized their workshops to produce 15,000 surgical masks a week. These will be distributed to medical staff in Paris hospitals.

In the United States
On April 7, Kering and all its Houses announced a joint donation of $1 million to the CDC Foundation. The funds will go towards the purchase of Personal Protection Equipment (PPE) and other essentials for medical staff in North America and certain regions of Latin America.

Meanwhile, the Group is supporting “A Common Thread,” an initiative launched by Anna Wintour and Tom Ford, and led by the CFDA/Vogue Fashion Fund. It is also providing support for “Your Friends in New York Want to Help,” a project led by designer Kerby Jean-Raymond.

Helping to combat the violence inflicted on women has always been major commitment for Kering. Sadly, there has been no respite in domestic violence, with the risk actually increasing during the period of lockdown.

In response to needs expressed by its partners in the United States, France, Italy and the United Kingdom, the Kering Foundation has distributed emergency funds to organizations and charities that support victims of domestic violence, enabling these groups to continue their work. The Foundation has also launched an awareness campaign entitled #YouAreNotAlone, to provide information and tailored resources for women who are victims of domestic violence and to point them towards specialist organizations in Europe and the United States that can provide support to them.
Through a separate campaign, entitled #StandWithWomen, the Foundation is also supporting Gucci and its Chime for Change program. Donations received by the website will help the Foundation’s partners to continue their work with girls and women who have been victims of violence.

In France, One In Three Women, the first European network of companies committed to combating violence against women, which the Foundation co-founded in 2018, launched an awareness-raising and fundraising campaign for the Fédération Nationale Solidarité Femmes to ensure local organizations will have sufficient resources to support survivors of violence during and after lockdowns have been lifted.

In Italy, Pomellato and Dodo have launched an awareness campaign and a fundraiser for victims of domestic abuse. The money raised will go to the non-profit organization D.i.Re, which operates Italy’s leading network of centers for dealing with violence against women. Funds will also go to CADMI, a women’s refuge in Milan for victims of domestic violence that has been supported by Pomellato for 10 years.

Supporting all its communities
Because lockdown and social distancing should not mean total isolation and being completely inward-looking, Kering and several of its Houses decided to share some messages of love, inspiration and beauty.

On April 1, Alexander McQueen launched the #McQueenCreators challenge, asking its community to work on a series of projects based on the House’s creations – starting with the Rose dress presented by Sarah Burton during the Autumn/Winter 2019 collection.

Lastly, Kering partnered with illustrator Soledad to offer messages of love, designed to be shared with others, via a series of illustrations that can be downloaded from the Group’s website and social networks. 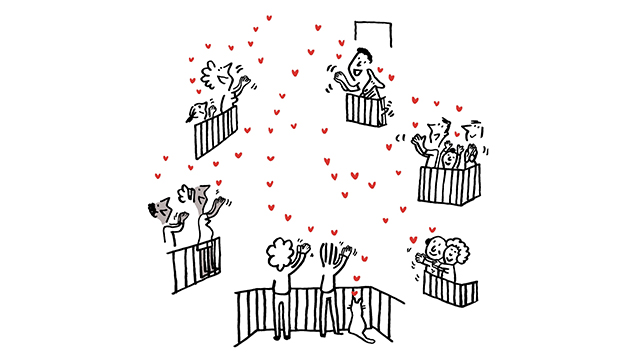 Press releases
• Kering contributes to the fight against COVID-19