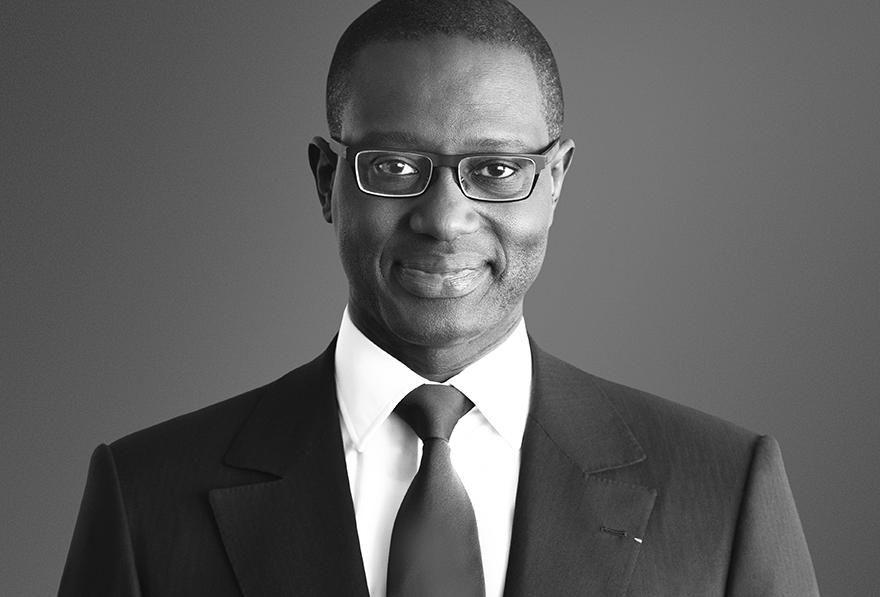 Throughout his career, Tidjane Thiam has led organizations in both the private and public sectors and developed projects and programs that stimulate businesses and economies.
At Credit Suisse, he set up a three-year restructuring program recognized by Euromoney with the “Banker of the Year” Award for Excellence in 2018 and in 2019. Under his leadership, Credit Suisse delivered in 2019 its highest profits since 2010.

His tenure as Group Chief Executive of Prudential plc from 2009 to 2015 saw the firm’s market capitalization treble to more than USD  60 billion. He was elected Chairman of the Board of the Association of British Insurers, a role he held from 2012 to 2014.

Prior to that, he held a variety of leadership roles at Aviva from 2002 to 2007 including CEO of Aviva Europe and Executive Director.

From 1994 to 1999, Tidjane Thiam returned to Cote d’Ivoire to serve as a Cabinet Secretary, CEO of the National Bureau for Technical Studies and Development, and represented Côte d’Ivoire vis-à-vis the World Bank/IMF. He led one of the largest and most successful emerging market privatizations and infrastructure development programs.

He featured among the “Young Global leaders of Tomorrow“ by the World Economic Forum in Davos in 1997 and included in the WEF’s Dream Cabinet in 1999.
Earlier in his career, Tidjane Thiam spent a decade with McKinsey and Company where he was a partner.

He was appointed Chairman of the Board of Directors of Rwanda Finance in November 2020, in charge of promoting Rwanda as an international financial center and has been a member of the Council for Inclusive Capitalism since 2019, where he serves as a Guardian (Council members advising His Holiness the Pope).

In 2019, he became a member of the International Olympic Committee (IOC), and joined the IOC Finance Commission in 2020.

Tidjane Thiam is a member of the Council on State Fragility chaired by former British Prime Minister David Cameron.

Tidjane Thiam was awarded the title of Chevalier of the French Legion of Honor in 2011. He was recognized on the TIME 100 list in 2010.

He is a graduate of the École Polytechnique and the École Nationale Supérieure des Mines de Paris, and holds an MBA with distinction from INSEAD.

Tidjane Thiam has been a Director of Kering since June 16, 2020. His term of office will expire at the end of the Annual General Meeting called to approve the financial statements for the year ending December 31, 2023.