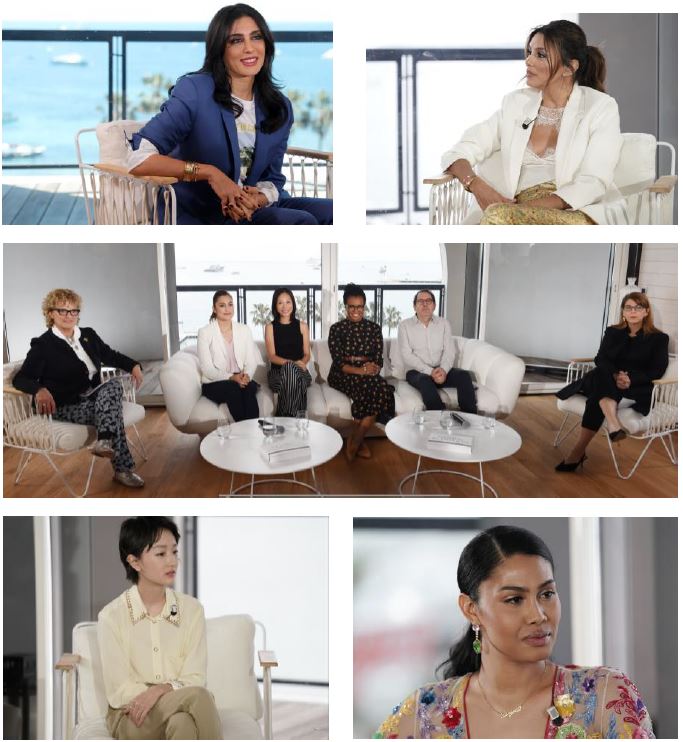 Nadine Labaki, Eva Longoria, Zhou Dongyu and Leyna Bloom, along with Stacy L. Smith and Claudia Eller, were joined by Michael Barker, Kirstin Benson, Jacqueline Coley and Anita Gou as they shared their experiences and views on women’s representation in cinema during a fascinating series of conversations.

The Women In Motion Award was presented to Chinese actress Gong Li, while the Young Talent Award went to German director Eva Trobisch.

A new series of podcasts, to be made available in the coming weeks, was meanwhile recorded at the Women In Motion studio. The guests comprised casting director Christel Baras, the Chief Executive Officer of Gaumont, Sidonie Dumas, César-winning producer Marie-Ange Luciani, film critic Guillemette Odicino and talent agent Elisabeth Tanner.

Attended by more than 300 invited guests from the cinema industry and the media, the new season of Talks began with Nadine Labaki. The Lebanese director spoke about the role of the artist in changing people’s mindsets, starting with her own personal experience. “When you live in a place with chaos, and politics is not leading anywhere, we need an alternative way of thinking. I think art is really the only way now. And I truly believe in our duty as artists, as filmmakers, to believe through our art that we change the world.” She also expressed her hope for a change in women’s representation in the movie industry, thanks to the action of feminist movements. “I can see a lot happening after the #MeToo and the #TimesUp movement. I can see a change in people’s minds. I can see the change in the fact that the debate is out there, the discussion is out there. I think the way to start the healing process in any problem is by starting to talk about it, and this is what is happening.”

Afterwards, actress Eva Longoria shared her experiences as a Hollywood actress, producer and director, highlighting the problem of film critics, too many of whom are men. “When a movie comes out by a woman and a male critic says ‘I don’t get it’ - that tanks the movie. So, we must change the balance of women critics. You need to be in a leadership position to demand that balance.” She followed up by underlining the importance of solidarity among women. “I think it’s important, once the door’s open and you’re there, to leave the door open for other women. When I hired my DP, she made sure the camera crew hired women.” She concluded by sharing her experience of motherhood and called on the cinema industry to change the way it deals with the subject. “Because we need to normalize that too. We’re moms. It happens!”

Claudia Eller, the Co-Editor-in-Chief of Variety, then chaired a round table discussion about women’s representation in cinema and the way that is reflected in the media. For the first time, the scope of a Women In Motion Talk was significantly extended to include the entertainment ecosystem that supports the cinema industry: the critics, photography, and all the key roles within a movie studio. Stacy L. Smith, a researcher and professor at USC Annenberg, and the creator of the Inclusion Rider, was joined by Michael Barker, co-president and co-founder of Sony Pictures Classics, Jacqueline Coley, a critic with Rotten Tomatoes, Kirstin Benson from Getty Images and Anita Gou, a producer. Stacy L. Smith began the discussion by describing the progress made in the film industry – and the battles that still need to be fought. “For the first time, this year 40% of films were led or co-led by females, driving the action. We have not seen this before in the 12 years that we have been investigating the Top 100 films. That is the good news. When we move to the C-Suite, only 25% of roles are held by women of the major studios. And very few film critics are women – even fewer are women of color - only 4%.”

Discussing the necessary change in mindsets and the space that needs to be made for female directors, among other roles, Michael Barker recalled the Women In Motion Talk in 2015 with Agnès Varda, who said with a smile that she obviously saw herself as a female director, but that she wanted to be ranked at the same level as Francis Ford Coppola! Kirstin Benson said that Stacy L. Smith’s research had made her realize that there were only two women among the 250 photographers at the festival’s red carpet... Meanwhile, producer Anita Gou defended the move to deliberately give more positions to women, so that ultimately, they will achieve parity with men. “The idea of a quota is almost a temporary solution. It’s a necessity because of the long history of things not changing,” she said. And Jacqueline Coley confirmed: “And so I do understand the apprehension toward quota and numbers, but I also think this is too big of a problem for our industry – it’s one of the biggest problems of our industry. If that is the situation, we are going to need seismic change.”

The fifth edition of the Women In Motion Talks ended with a discussion with actress Leyna Bloom who talked about racism, sexism and transphobia. She underlined the role of directors in the evolving representation of women in cinema and thanked Danielle Lessovitz (the producer of Port Authority, the film that brought her to the Festival de Cannes). “We talk about film, but also about courage – of a female director!” After discussing the years of struggle that she had faced before gaining recognition as an actress, she was confident about the future, saying: “I mean, growing up, that idea of seeing a trans-woman on any magazine cover, let alone Time, was non-existent. Just like this moment. Now, women like me, we have a seat at the table.”

For the fifth edition of Women In Motion, Kering has launched a set of podcasts produced by journalist Geraldine Sarratia. The first series is already available and looks back at the highlights of previous Talks by five leading, committed figures in the world of cinema: Agnès Varda, Jodie Foster, Salma Hayek-Pinault, Aïssa Maïga and Emilia Clarke. For the second series of podcasts, which were recorded during the Festival de Cannes at the Women In Motion studio, Kering gave the floor to key women in the cinema industry whose roles are often not widely known. This series of podcasts, which will be available in the weeks ahead, features casting director Christel Baras, Chief Executive Officer of Gaumont, Sidonie Dumas, César-winning producer Marie-Ange Luciani, film critic Guillemette Odicino and talent agent Elisabeth Tanner.

The official Women In Motion dinner was held on Sunday, May 19 at the Place de la Castre, on the hills above Cannes. During a dinner created by chef Hélène Darroze, Chinese actress Gong Li received the Women In Motion Award from François-Henri Pinault, Pierre Lescure and Thierry Frémaux. The Young Talents Prize went to German director Eva Trobisch, who was selected by the 2018 winner, Carla Simón.