In partnership with Les Rencontres d’Arles, the 2020 Women In Motion Award for photography has been given to Sabine Weiss. 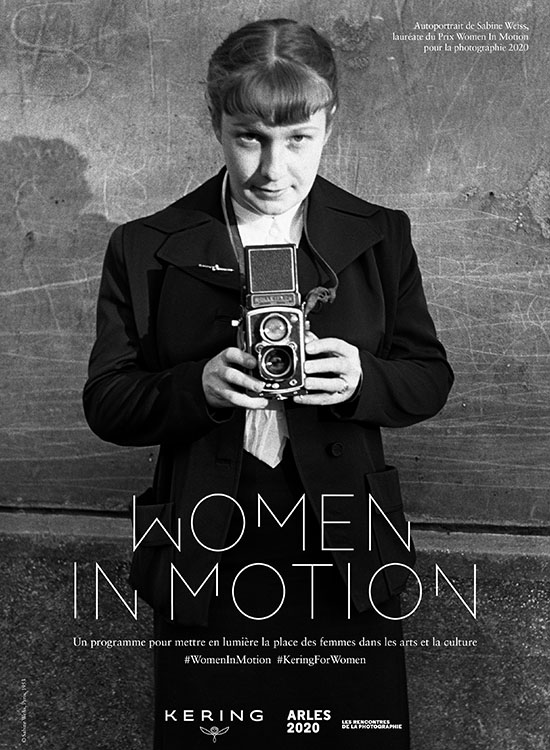 The first Women In Motion LAB to be launched in association with Les Rencontres d’Arles highlighted the contribution made by women to the global history of photography. The project, led by women historians Luce Lebart and Marie Robert drew on research carried out by 160 women experts in photography from around the world.

Despite the cancellation of ‘Les Rencontres d’Arles at Laennec’, due to the current health restrictions, Kering and Les Rencontres d’Arles were determined to go ahead with the second edition of the Women In Motion Award for photography. With November being traditionally dedicated to photography, they are now delighted to present the 2020 Women In Motion Award to the outstanding photographer Sabine Weiss for her life’s work.

Still active today, Sabine Weiss is a prolific artist who has made a major contribution to the humanist school of French photography, which includes the likes of Robert Doisneau, Willy Ronis and Brassaï. At the age of 96, she has probably enjoyed the longest career of any photographer, having devoted nearly 80 years to her art (see her biography below).

Meanwhile, the partnership between Kering and Les Rencontres d’Arles also led to the founding of the Women In Motion LAB in 2019. For the first two years, it has been dedicated to a research project highlighting women’s contribution to the history of photography around the world. Led by women historians Luce Lebart and Marie Robert, with the help of 160 women experts in photography from every continent, the project looks at the work and careers of some 300 women who have made their mark on photography from the very beginning.

Kering is also collaborating for the first time with the Paris Photo art fair for photography. As a way of furthering its commitment to women photographers, the Group is supporting the Paths Elles X Paris Photo 2020 exhibition organized by France’s Ministry of Culture. With the cancellation of the traditional Paris Photo fair at Le Grand Palais, a digital exhibition entitled Paths Elles X Paris Photo has been created at ellesxparisphoto.com. The website includes interviews with around 30 women photographers about their status as female artists, their commitments as activists, and their sources of inspiration.

Sabine Weiss, the winner of the 2020 Women In Motion Award, will also feature on the website.

Born in 1924 in Saint-Gingolph in Switzerland, Sabine Weiss took to photography at an early age. After a three-year apprenticeship with Paul Boissonnas in Geneva, she became the assistant to Willy Maywald, a German photographer specializing in fashion and portraits, in 1946. After marrying American painter Hugh Weiss in 1950, she launched her career as an independent photographer, and frequented the post-war arts world. Their house near the Porte Molitor in Paris, where Sabine Weiss still lives today, was both their home and the studio where they worked. In 1952, with the help of Robert Doisneau, she became one of the few women to be employed by the Rapho photo agency, with her work gaining recognition in the United States. Her photography was seen as part of the so-called ‘humanist’ movement, which sought to reconcile public space with the human body.

Her pictures are all about women and men occupied with their daily lives, their work and their thoughts. Her work was presented in two exhibitions at New York’s Museum of Modern Art, Post-War European Photography (1953) and The Family of Man (1955). She was also given her own exhibition at the Art Institute of Chicago (1954), before appearing at the national photography fair held in the French National Library in 1955, 1957 and 1961. She also worked on a long-term basis for the likes of Vogue, the New York Times Magazine, Life, Newsweek, Point de Vue-Images du Monde, Paris Match, Esquire and Holiday. It led her to photograph many male and female artists, painters and sculptors, along with musicians, writers and actors. Along with her assignments for French and international magazines, Sabine Weiss also worked until the 2000s for numerous institutions and brands, providing a variety of reportage, fashion shoots, advertising pictures, celebrity portraits and photographs of social issues.

In 2016, the Jeu de Paume organized a large exhibition at Chateau de Tours, and in 2018, the Centre Pompidou in Paris presented the show Les villes, la rue, l’autre. The Musée de l’Elysée in Lausanne, Switzerland, will be responsible for preserving Sabine Weiss’s photographic archives in the new museum at PLATEFORME 10 in fall 2022.
Sabine Weiss is represented by Les Douches la Galerie, Paris.

Kering’s commitment to women is a major priority for the Group. The Women In Motion program extends that commitment to the world of culture and the arts, where gender inequality remains glaring, despite creativity being one of the most powerful drivers for change.
In 2015, Kering launched Women In Motion at the Festival de Cannes with the aim of shining a light on women in cinema, both in front of and behind the camera. Since then, the program has been expanded to include the fields of photography, art and literature. Through its awards, the program recognizes both inspirational figures and talented young women, while its Talks provide an opportunity for leading personalities to share their views on the representation of women in their profession.
Over the past five years, Women In Motion has been a platform of choice for helping to change mindsets and to reflect on both the representation of women and the recognition they receive in every field of the arts.

Created in 1970, Les Rencontres d’Arles is a world-renowned festival of photography. Acting as a cultural incubator, and specializing in developing a very close relationship with its artists, Les Rencontres d’Arles is an annual indicator of the state of photographic creativity. A forum for reflecting and promoting current artistic practice and thinking, it lies at the crossroads of different disciplines. Every year, Les Rencontres d’Arles presents the work of 250 artists and curators in 40 different exhibitions held in specially-staged heritage settings. Attended by an ever-more knowledgeable audience, the festival reveals trends, demonstrates new approaches, explores and questions the changing status of images, and creates content that draws on the sociological and geographical diversity of our world.

For the past three years, a policy of raising the profile of women photographers has led France’s Ministry of Culture to organize the Elles X Paris Photo exhibition in association with the Paris Photo art fair. Commissioning for the exhibition is carried out by Karolina Ziebinska Lewandowska, curator of the photography section of the Centre Georges Pompidou. This year, she has selected works by nearly 40 women, ranging from talented younger artists and less well-known individuals to the leading figures in the history of photography. Kering is proud to be supporting the Elles X Paris Photo 2020.

A global Luxury group, Kering manages the development of a series of renowned Houses in Fashion, Leather Goods, Jewelry and Watches: Gucci, Saint Laurent, Bottega Veneta, Balenciaga, Alexander McQueen, Brioni, Boucheron, Pomsellato, DoDo, Qeelin, Ulysse Nardin, Girard-Perregaux, as well as Kering Eyewear. By placing creativity at the heart of its strategy, Kering enables its Houses to set new limits in terms of their creative expression while crafting tomorrow’s Luxury in a sustainable and responsible way. We capture these beliefs in our signature: “Empowering Imagination”.