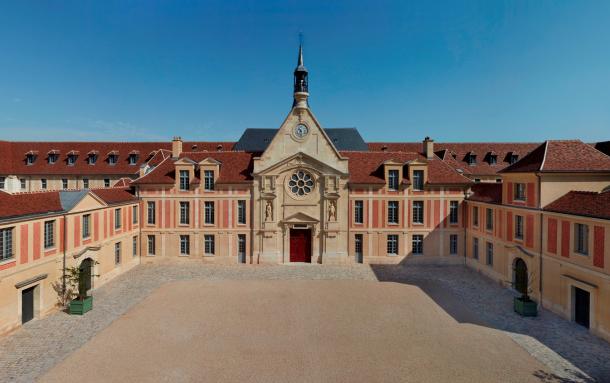 For the 33rd European Heritage Days, Kering is inviting the public to explore 40, rue de Sèvres in the 7th arrondissement of Paris, formerly the Laennec Hospital from 1634 to 2000.

The listed Historic Monument, now Kering’s and Balenciaga’s head offices, will be open on Saturday 17 and Sunday 18 September 2016. For the occasion, a number of works from the Pinault Collection will be on display, as well as selected haute couture creations from the Balenciaga archives.

After extensive renovation work, 40, rue de Sèvres, known to Parisians as the home of the Laennec Hospital until the year 2000, is now the head office of Kering and Balenciaga. The site, on which building first began in the 17th century, is one of the jewels of the capital’s heritage. For this reason, meticulous studies were carried out prior to commencing the major renovation work in order for it to fulfil its new purpose whilst preserving the building’s architectural and historic integrity.

From 1634, 40, rue de Sèvres was dedicated to caring for the poor of Paris. Known as the hospital ‘for Incurables’, it was renamed Laennec Hospital in 1878 – a name it retained until the year 2000. The building’s architecture, while in keeping with the style of many of the great Parisian hospitals such as the Invalides and the Salpêtrière, stands out for its austerity.

The renovation project, directed by Benjamin Mouton, chief architect for historic monuments, involved rediscovering and highlighting the buildings dating from the 17th and 18th centuries, while fully respecting the integrity of its classified and listed spaces, such as the Chapel built under Louis XIII. The premises could then house new office space that is fully compliant with modern standards and requirements. In addition, Kering’s respect for environmental standards – a core strategic value for the brand – enabled 40, rue de Sèvres to become one of the very first historic monuments to receive the French High Environmental Quality label (HQE Rénovation).

François-Henri Pinault opened 40, rue de Sèvres to the public for the 33rd European Heritage Days. It will house two temporary exhibitions illustrating the creative energy and heritage status of this unique site in the heart of Paris.

A selection of works from the Pinault Collection will be displayed in the Chapel, exploring representations of the sacred and in many cases inviting reflection on the reinterpretation by contemporary artists of iconic masterpieces which have marked the history of religious art.

In addition, an unprecedented selection of haute couture dresses by Cristóbal Balenciaga will be presented in the new Balenciaga areas. Twenty-seven original designs by the master from the House archives and representative of his two creative periods (the Spanish period from 1930 to 1937, and the Parisian period from 1937 to 1968), will be on display in the Croix Est at 40, rue de Sèvres.

François-Henri Pinault, Chairman and CEO of Kering, explains: ‘From the outset I wanted Kering’s and Balenciaga’s new head offices to reflect our identity and our values. The unusual project to renovate the former Laennec Hospital was an ambitious challenge. This unique place in the centre of Paris, remarkable by its history, its size and its simple beauty, has a soul. The original harmony of the site and the high quality of the renovation work mean that 40, rue de Sèvres will not only a be source of pride for all our employees, but a place of sharing and inspiration. It perfectly reflects our nature as a Luxury Group, a Group in motion that embodies a bold luxury, with the freedom to make its own choices.’

He added: ‘I was keen to give to the public rapid access to this architectural jewel, which is such a part of Parisian history, and which has now been given a new lease of life. The temporary exhibitions we are presenting today fully reflect this two-fold mission of heritage and creativity.’

The original purpose and history of this exceptional historical jewel at 40, rue de Sèvres also firmly establishes the building as an emblem of the people, and thus in perfect harmony with the ‘Heritage and Communities’ theme of this year’s European Heritage Days.