Five years of Women in Motion

To mark this anniversary, Kering and the Festival de Cannes are pleased to announce the renewal of their partnership for five years. 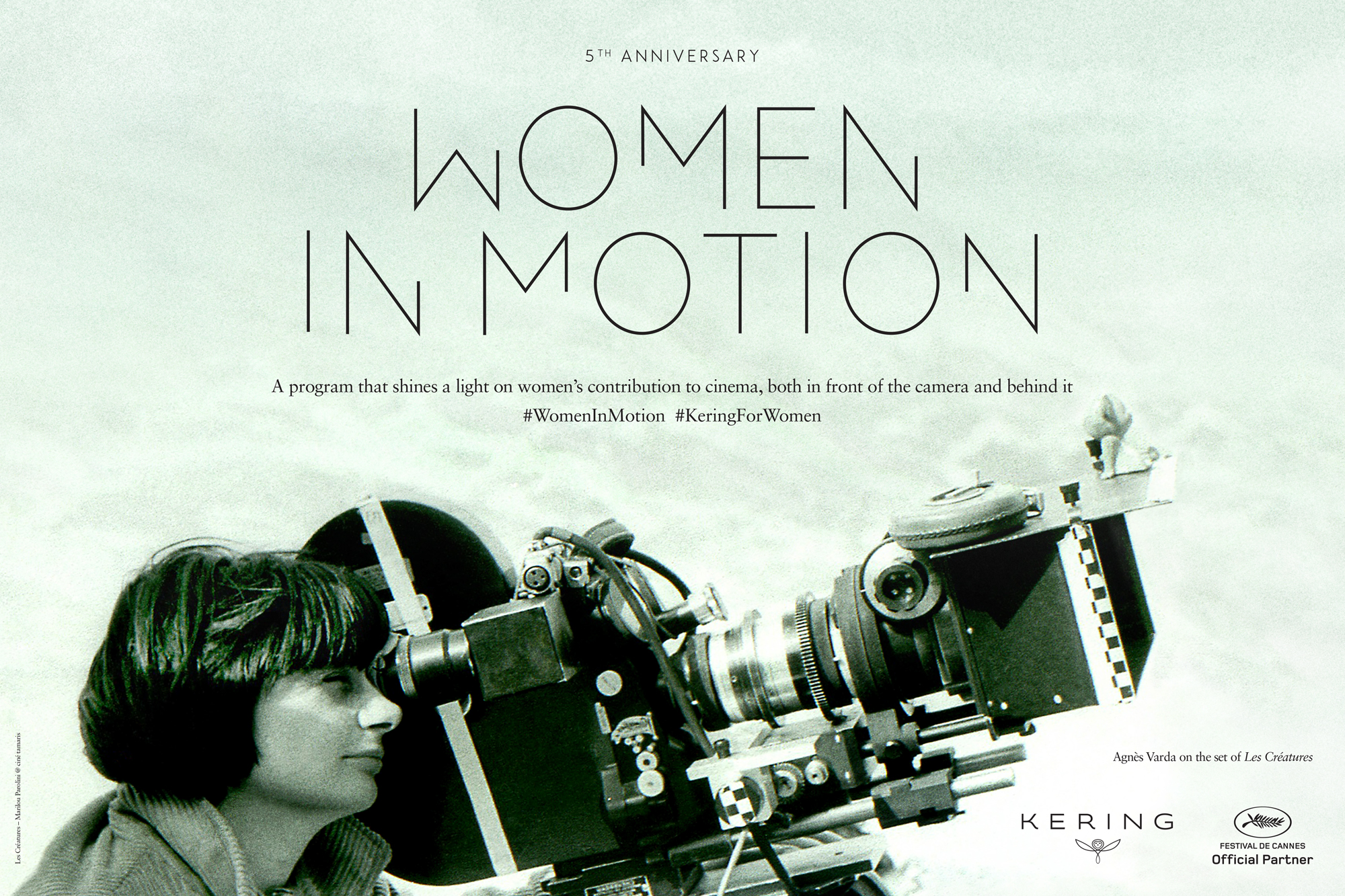 Along with its regular talks and prizes, the fifth edition of Women In Motion will be enhancing its program through a collaboration with American professor and researcher Stacy L. Smith, Director of the Annenberg Inclusion Initiative at the University of Southern California (USC). Her main focus will be to carry out research into the representation of women in the cinema and their reflection in the media.

Meanwhile, as another new addition for 2019, Women In Motion will produce a series of podcasts that will provide a voice for women in the movie industry, whether they are working in front of the camera or behind it.

This year, Kering is using the official poster of Women In Motion to pay tribute to Agnès Varda, as the great filmmaker represented everything that the program stands for. She was a leading figure in the program from the first edition onward, speaking on several occasions with her characteristic passion and imagination about her battles, feminism and the solutions she proposed – and to which she remained committed.

WOMEN IN MOTION AND THE FESTIVAL DE CANNES

In 2015, Kering became an Official Partner of the Festival de Cannes and launched Women In Motion with the aim of shining a light on women’s contribution to the cinema industry, both in front of and behind the camera. Since then, the program has been extended to the rest of the world and to include all the creative industries. By continuing their collaboration for five years, the two partners underlined their desire to make the debate about the role of women in the cinema industry a top priority.

“Since its creation, Women In Motion has become an essential focus of the festival. But despite the progress made so far, and the freedom today to speak out, gender equality has yet to be achieved. We are impatient to allow new voices to be heard, to support talented young women and to  keep fighting for a cinema industry that is more representative of the richness and diversity of societies everywhere.”

“By renewing its partnership with Kering for a further five years, the 72nd edition of the Festival de Cannes is delighted to continue its support for women in cinema. It is vital to appreciate and recognize their contribution, so that the industry can move towards a position of equality. This is the objective of the Women In Motion program, which was launched by Kering five years ago at this very festival.”

“We are proud to see Women In Motion remain in the Festival de Cannes calendar. Over the past five years, the program has enabled many leading figures in the world of cinema to give their views on women’s representation in the movie industry, providing them with a valuable platform. The Festival is proud to take part in this essential fight for equality by renewing its commitment alongside Kering.”

Kering is proud to announce its partnership with Stacy L. Smith, a professor at USC (University of Southern California) Annenberg, specializing in genre studies in film and television, as well as music and film criticism. She has authored over 40 studies with her Annenberg Inclusion Initiative on various aspects of entertainment, including the landmark CARD report in 2016 and annual studies examining inclusion in top-grossing films and popular music. Stacy L. Smith also works to support solutions to increase representation in media. In 2016, with Kalpana Kotagal and Fanshen Cox DiGiovanni, the three developed the inclusion rider, a contractual clause that guarantees the representation of minorities in films. In 2018, Stacy L. Smith worked with Brie Larson to advocate for greater access and opportunity for underrepresented film critics at notable film festivals. In 2019, Stacy L. Smith partnered with TIME'S UP to launch the 4% challenge, which asks Hollywood industry members to work with a female film director in the next eighteen months; the challenge has already been accepted by more than 120 notable creatives and 7 major companies. The collaboration of Women In Motion with Stacy L. Smith will begin in Cannes during a roundtable led by the researcher, and will continue for 9 months of research on the theme of the representation of women in the cinema and their reflection in the media.

“Our partnership with Women In Motion and Kering offers an unprecedented opportunity to advance inclusion in the cinema industry in meaningful ways, particularly when it comes to aspects of press coverage. Together, we can engage key stakeholders in meaningful ways to develop and implement true solutions and create lasting change.”

LAUNCH OF WOMEN IN MOTION PODCASTS

Beginning on May 15, an initial series of podcasts will look back at five of the program’s key moments in the company of leading figures who have illustrated the diversity and plurality of Women In Motion in their respective personalities and careers. The series, which provides both talking points and viewpoints, opens with a recording of Agnès Varda during the first edition of the program. It continues with contributions from Jodie Foster, Salma Hayek-Pinault, Aïssa Maïga and Emilia Clarke. During this year’s festival, a new series of podcasts will be recorded in the Women In Motion studio, giving women who contribute to the movie industry in their different ways an opportunity to air their views.
All the podcasts will be available on iTunes, Spotify, Deezer and Soundcloud.

Women In Motion aims to shine a light on women’s contribution to the cinema industry, both in front of and behind the camera. Launched in May 2015 by Kering, a partner of the Festival de Cannes, Women In Motion is an integral part of the festival’s official program and has extended its reach around the world through a series of events. In Cannes, Women In Motion rewards inspirational figures and talented young women with its prizes, and also offers cinema’s leading female lights a chance to express their views on the representation of women - whether onscreen or within the industry in general - through its series of talks.  After more than 50 talks and over 70 speakers, Women In Motion has become a platform of choice for helping to change mindsets, for celebrating the contributions of women who have made their mark on the movie industry, and for reflecting on the role and recognition given to women in cinema, culture and the arts.