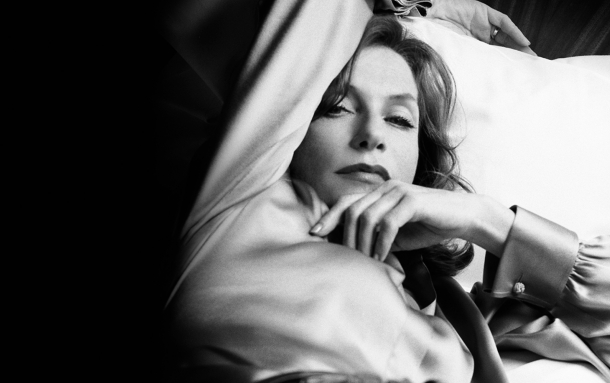 Kering, official partner to the Festival de Cannes, has chosen Isabelle Huppert as the 2017 face of Women in Motion.

For 3 years, Women in Motion has shone a spotlight on women’s contribution to cinema through a series of discussions between major figures from the film world and two Awards in celebration of talented women in film.

To mark the 70th anniversary of the Cannes International Film Festival, to be held from 17 to 28 May 2017, Kering, an official partner to the Festival has chosen a portrait of Isabelle Huppert for the official poster of the third annual Women in Motion programme. Her penetrating gaze dominates the photograph, which draws on the aesthetics of the silver screen in vibrant homage to the power of women in cinema.

A leading actress universally acclaimed for her filmography featuring the world’s greatest directors, Isabelle Huppert is an iconic figure in film, and in particular at the Festival de Cannes, where she was president of the Jury in 2009, and where she has been awarded the Best Actress Prize on two separate occasions. Her career, like the roles she plays, is a genuine source of inspiration for the public.

Launched in 2015, Women in Motion endeavours to focus our attention on the crucial role of women in film, and to the importance of continuing to fight for greater equality and access to opportunities for talented young women.

Throughout the Festival, a series of Talks, open to both journalists and film professionals, will enable major industry figures to compare and contrast experiences and views on women’s contribution to film, and to share their recommendations for greater representation within the sector.

The 2016 discussions, which featured Jodie Foster, Juliette Binoche, Susan Sarandon, Geena Davis, Chloë Sevigny, Houda Benyamina, Alice Winocour and Salma Hayek Pinault, focused on a variety of questions, including the problem of financing for films directed by women or about women, inequalities in salary and the lack of representation of women and their work on screen.

Kering and the Festival de Cannes will also be awarding the Women in Motion Awards to two talented film industry figures at the official event dinner on Sunday, 21 May 2017. The first will go to an emblematic figure in film, whose career inspires others and embodies the programme’s values, while the Young Talents Award will be awarded to a promising rising film industry professional chosen by the first prize-winner. Worth €50,000, it will help support one or several of the winner’s film projects.

At last year’s event, the Women in Motion Awards went to Geena Davis and Susan Sarandon, reunited to celebrate the 25th anniversary of the cult film Thelma & Louise, and to three young directors: Leyla Bouzid, Gaya Jiji and Ida Panahandeh.

‘As is still the case in far too many walks of life, women are under-represented and disadvantaged in the film world, despite their priceless contribution to everything that makes cinema what it is. Promoting gender equality lies at the heart of Kering’s priorities, which is why I am proud to be involved in this fight, alongside the Festival de Cannes. For three years now, Women in Motion has been a leading forum in changing mindsets, celebrating the most extraordinary figures in our industry and offering practical support to talented women.’

‘I am delighted to have joined forces with Kering to showcase the value of women and their role in film. This is a cause that deserves all our attention, and it is crucial to raise awareness among the many festival-goers who visit Cannes each year. Through Women in Motion, we look forward, at the 70th Festival de Cannes, to being able to continue to strive for greater female representation in the film world.’

‘Once again this year, the Women in Motion programme will form a key part of the Festival de Cannes. We are delighted that an initiative designed to highlight the contribution of women can flourish at the Festival and increase in visibility with every passing year. It is vital to give everyone a chance to express their views on the subject, share concrete examples of inequality and suggest ways of fighting them.’

Women in Motion sets out to showcase the contribution of women to the film industry, whether in front of the camera or behind it. Launched in 2015 by Kering, in partnership with the Festival de Cannes, Women in Motion is an integral part of the Festival’s official programme. The initiative is based on two pillars: Talks open to journalists and industry professionals which give major figures the opportunity to compare and contrast their experiences and viewpoints around the question of women’s contribution to cinema, and to pool their recommendations for greater representation within the industry. The two Women in Motion Awards are awarded each year to an inspiring figure who embodies the programme’s values, and to a young film industry professional, who receives funding support for cinematographic projects.

available on the Women in Motion pressroom