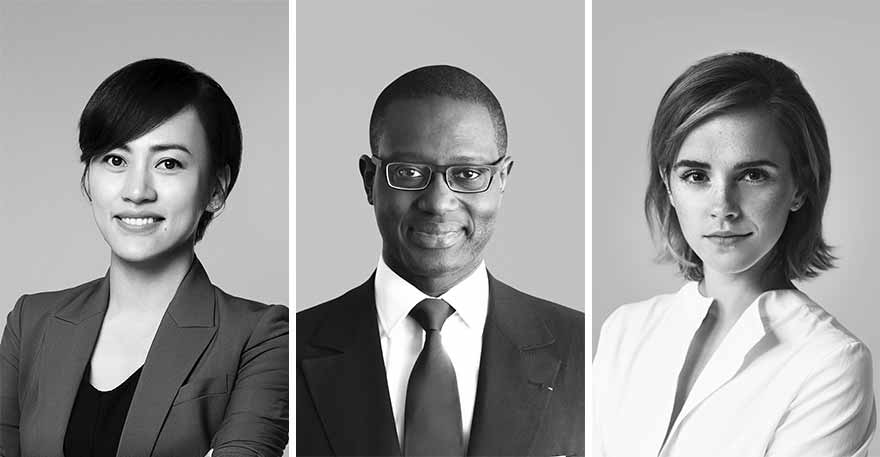 Kering’s shareholders have approved the appointment of Ms. Jean Liu, Mr. Tidjane Thiam and Ms. Emma Watson as Directors during their Annual General Meeting on June 16th, as proposed by the Board of Directors gathered on March 12th, 2020.
Ms. Watson has also been appointed Chair of the Sustainability Committee of the Board of Directors, while Mr. Thiam was appointed Chair of the Audit Committee.

The combined wealth of experience and skillsets of these three well-known figures will be a complementary asset to the Group, enhancing the quality of the work done by the Board of Directors. The latter will benefit from their contribution in defining the Group’s strategic orientations.

François-Henri Pinault, Chairman and Chief Executive Officer of Kering, commented:
“I am delighted to welcome Jean Liu, Tidjane Thiam and Emma Watson to our Board of Directors. Their respective knowledge and competences, and the multiplicity of their backgrounds and perspectives will be invaluable additions to Kering’s Board of Directors. The collective intelligence that comes from diverse points of view and the richness of different experiences are crucial to the future of our organization. I am proud to add such impressive talents to the team.”

Jean Liu is the President of Didi Chuxing. Working with Cheng Wei, founder and CEO of DiDi, Jean Liu led DiDi to become the world’s largest multi-modal mobile transportation platform, delivering over 10 billion orders a year to over 550 million users across Asia, Latin America and Australia. She champions a more collaborative approach for the new tech sector to work with policymakers, the public sector and the automotive industry to address the world’s urban services, environmental and employment challenges.
Jean Liu is also an advocate for women’s empowerment in the tech and sharing economy sectors, in part through the DiDi Women’s Network, the first career development program for women in the Chinese internet sector.
Jean Liu was featured on Fortune’s Most Powerful Women International List from 2016 to 2019, and Finance Asia’s list of The Region’s Top Entrepreneurs in 2019. She was recognized as one of Time’s 100 Most Influential People and was honored by the Asia Society as an Asia Game Changer in 2017. In 2016, she was named on Fast Company’s World’s Most Creative People in Business List.
Jean Liu received a bachelor's degree from Peking University and a master's degree from Harvard University, both in Computer Science, and earned an honorary doctorate in Commercial Science at New York University. She is a founding member of the advisory board of the Bloomberg New Economy Forum and a member of the Asia Society’s Board of Trustees.

Tidjane Thiam served as Chief Executive Officer of Credit Suisse Group AG from July 2015 to February 2020. In April 2020, President Cyril Ramaphosa, Chairperson of the African Union, appointed Mr. Thiam as African Union Special Envoy on Covid 19.
Throughout his career, Mr. Thiam has led organizations in both the private and public sectors, and has developed projects and programs that stimulate businesses and economies.
At Credit Suisse, progress continues to build on a successful three-year restructuring program that was recognized by Euromoney with the ‘Banker of the Year’ Award for Excellence in 2018. Under his leadership, in 2019, Credit Suisse delivered its highest profits since 2010.
His tenure as Group Chief Executive of Prudential plc from 2009 to 2015 saw the firm’s market capitalization treble to more than USD 60 billion. He was elected Chairman of the Board of the Association of British Insurers, a role he held from 2012 to 2014. Prior, he held a variety of leadership roles at Aviva from 2002 to 2007, including CEO of Aviva Europe and Executive Director.
From 1994 to 1999, Mr. Thiam returned to Côte d’Ivoire to serve as a Cabinet Secretary, CEO of the National Bureau for Technical Studies and Development, and represented Côte d’Ivoire vis-à-vis the World Bank/IMF. He led one of the largest and most successful emerging market privatizations and infrastructure development programs. He was recognized as a Global Leader for Tomorrow by the World Economic Forum in 1997 and included in the WEF’s world ‘dream cabinet’ in 1999.
Earlier in his career, Mr. Thiam spent a decade with McKinsey and Company, where he was a partner.
Mr. Thiam is a member of the Group of Thirty (G30). In 2019, he became a member of the International Olympic Committee (IOC) and was appointed in May 2020 a member of the IOC Finance Commission. From 2014 to 2019 he served on the Board of Directors of 21st Century Fox.
Mr. Thiam was awarded the Chevalier of the French Legion of Honor in 2011. He was recognized on the ‘Time 100’ list in 2010.
He is a graduate of the École Polytechnique and the École Nationale Supérieure des Mines de Paris, and holds an MBA with distinction from Insead. He has received a degree of Doctor of Law, honoris causa, from the University of Warwick.

Emma Watson is a British actor and activist. She first came to the public’s attention playing Hermione Granger in the film adaptations of the Harry Potter book series, which enjoyed immense success worldwide. Twenty years later, she is one of the world’s most popular actors and best-known activists.
Emma Watson’s filmography includes The Perks of Being a Wallflower, The Bling Ring, Noah and Disney’s Beauty and the Beast. She most recently starred in Greta Gerwig’s Little Women.
In May 2014, she earned a degree in English Literature from Brown University. Also in 2014, she was appointed a UN WOMEN Global Goodwill Ambassador and launched the HeForShe initiative aimed at involving men in the promotion of gender equality. Her work on the HeForShe campaign earned her a place on Time Magazine’s TIME 100 list of the world’s most influential people in 2015.
In 2016, she created Our Shared Shelf, a feminist book club.
Emma Watson is part of the TIME'S UP Entertainment Steering Committee and brought the movement to the UK, coordinating its launch at the UK Film BAFTAs in 2018 and building a network of hundreds of women from across the industry.
Her consultation with the women’s movement led to the establishment of a new UK Justice and Equality Fund, hosted by Rosa and launched by Ms. Watson with a £1million donation. The fund aims to end cultures of harassment, abuse and impunity by resourcing expert organizations in this field. She has also helped launch new UK industry-wide guidelines on harassment and bullying with the British Film Institute (BFI), the British Academy of Film and TV Arts (BAFTA), the Advisory, Conciliation and Arbitration Service (ACAS) and other leading bodies. In 2019, French President Emmanuel Macron invited her to sit on the G7’s advisory Gender Equality Council.
Emma Watson is also a pioneer in advocating for sustainable fashion and is a supporter of Good On You, a mobile app which allows consumers to check the sustainability credentials of clothing brands.
In 2018, she was invited to guest edit an edition of Vogue Australia on sustainable development and responsible consumption.

A global Luxury group, Kering manages the development of a series of renowned Houses in Fashion, Leather Goods, Jewelry and Watches: Gucci, Saint Laurent, Bottega Veneta, Balenciaga, Alexander McQueen, Brioni, Boucheron, Pomellato, DoDo, Qeelin, Ulysse Nardin, Girard-Perregaux, as well as Kering Eyewear. By placing creativity at the heart of its strategy, Kering enables its Houses to set new limits in terms of their creative expression while crafting tomorrow’s Luxury in a sustainable and responsible way. We capture these beliefs in our signature: “Empowering Imagination”. In 2019, Kering had over 38,000 employees and revenue of €15.9 billion.