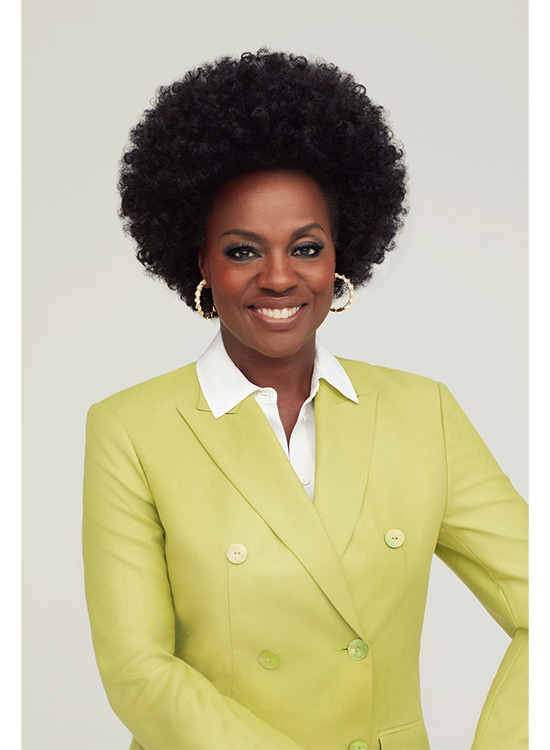 Viola Davis, known throughout the world for her acting roles and her commitment to the rights of women and minorities, is one of the most influential American actresses and producers of her time.

Her talent, hard work, choice of roles and the way she interprets them have earned her the very highest recognitions in the film industry. Viola Davis is one of the few Hollywood personalities to have won a Golden Globe, a BAFTA, four SAG Awards, and what Hollywood calls the Triple Crown of Acting: two Tony Awards, an Oscar and an Emmy, for her roles in the stage play King Hedley II, Fences and its remarkable film adaptation, and the TV series How to Get Away with Murder. This astonishing record also makes her the only African American actress to have received so many nominations and awards for her roles in theater, television and film.

A committed activist, Viola Davis has regularly called for greater inclusion in the film industry and campaigned for gender equality. In January 2018, she took part in a Women's March that included female politicians, women in the film industry and feminists, along with members of the public. In a passionate address to the crowd, she said: “I am speaking today not just for the #MeToos, because I was a #MeToo. But when I raise my hand, I am aware of all the women who are still in silence. The women who are faceless. The women who don’t have the money, and don’t have the Constitution, and who don’t have the confidence, and who don’t have the images in our media that gives them a sense of self-worth enough to break their silence that’s rooted in the shame of assault, that’s rooted in the stigma of assault.” Her emotional speech drew on her personal experience of trauma, poverty and her many struggles in life, along with her incredible resilience. Broadcast on every TV channel, and followed and shared on social media networks, this powerful speech was a source of encouragement, both in the way she spoke and her sense of empathy, for everyone to speak up.

Viola Davis also called out the blatant lack of diversity in the film industry, whether in production, writing or directing, which remains a very powerful brake on equality. Another speech to make its mark on Hollywood and the rest of the world came in 2015, as she received her Emmy Award for Outstanding Lead Actress in a Drama Series for her role in How to Get Away with Murder. After quoting Harriet Tubman, she told the audience: “The one thing that separates women of color from anyone else is opportunity… you cannot win an Emmy for roles that simply aren’t there.” She was the first African American to win the award.

This lack of diversity in the industry led her to create her own production company, JuVee Productions, with her husband Julius Tennon. The move enabled her to develop many stories and roles that would not have existed otherwise.

In addition to her fight for the rights of women and minorities, Viola Davis also combats the effects of poverty, particularly through her involvement since 2014 with the campaign against undernutrition Hunger Is, and the No Kid Hungry campaign, of which she is a spokesperson since 2020. She plays an active part in many fundraising events, helping schools in the state of Rhode Island where she grew up.

Viola Davis has just published her autobiography, Finding Me. The book immediately became a #1 New York Times bestseller. Finding Me is an intensely personal account, written during lockdown, that reveals her childhood in an underprivileged environment, growing up with what would seem were insurmountable odds. Viola Davis describes what she saw and experienced during her childhood and youth, highlighting the harassment and abuse faced by the most disadvantaged people in society. She also provides a glimpse of how to find your own path in life, embracing your past.

Kering and the Festival de Cannes wish to recognize her activism and achievements by presenting her with the Women In Motion Award. Since its launch in 2015, the program has been rewarding and highlighting women’s creativity and unique contribution to culture and the arts, and their role in helping to transform our vision of the world through their work.

The Women In Motion Awards at Cannes have honored the careers and commitment of iconic women in the film world: Jane Fonda in 2015, Geena Davis and Susan Sarandon in 2016, Isabelle Huppert in 2017, Patty Jenkins in 2018, Gong Li in 2019 and Salma Hayek in 2021.

Born in 1965 in Saint Matthews, South Carolina, Viola Davis is an American actress and producer. She began her career in the theater in the 1990s, before winning critical acclaim in the film The Help. In 2014, she took the lead role in the TV series How to Get Away with Murder, produced by Shonda Rhimes, for which she won an Emmy Award. In 2016, she starred in Fences alongside Denzel Washington, who also directed the film, and won both a Golden Globe and an Oscar for Best Supporting Actress. She was nominated again for a Golden Globe and an Oscar for Best Actress in 2020 for playing blues singer Ma Rainey in Ma Rainey's Black Bottom. She is currently on screen in the series The First Lady, broadcast on Show Time in the United States since April 17, where she plays the iconic Michelle Obama. In April 2022, her memoir Finding Me was released in the United States.