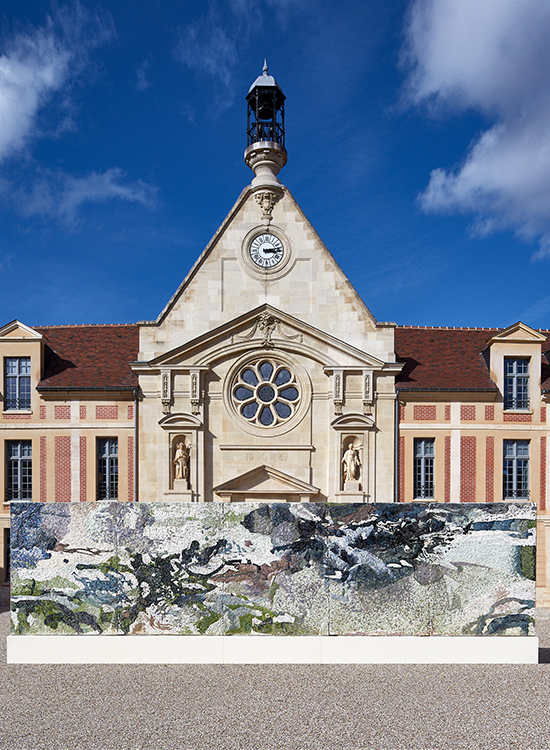 From October 15 to 22, Kering will be opening the doors of 40, rue de Sèvres to the public, so that visitors can discover the monumental sculptures of the Paul Haim collection. The works will be viewed in an exceptional, temporary location, prior to being auctioned by Christie’s on October 22.

Brought together in Paul Haim’s fantastic private collection, a total of 41 monumental sculptures by the leading artists of the 20th century will be on display in the chapel, the main courtyard and the gardens of the former Laennec hospital. All these works had previously been kept in La Petite Escalère, a secret garden on the banks of the Adour river, not far from Bayonne and Biarritz.

Never open to the public, and hidden by lush vegetation, the garden was only ever visited by the privileged few. Artists, friends, students and members of an association, The Friends of La Petite Escalère, have helped to bring this magical place to life, from the 1960s until today.

The exhibition will be open to the public, by reservation only, from October 15 to 22, in strict accordance with the health measures currently in force.

A jewel of Parisian heritage, 40, rue de Sèvres is known for having been home to the Laennec hospital until 2000, before being the subject of a vast renovation project. Having accommodated the practical needs of a hospital, this architectural masterpiece had suffered damage to its original appearance in many areas over the years.

The challenge was immensely complex: to restore the site to its former glory without losing its original spirit – and to comply with the rules for renovating listed buildings and spaces, such as the chapel built during the reign of Louis XIII.

The setting has been the headquarters of Kering and its House, Balenciaga, since 2016. The Group has actively supported the renaissance of the site and its change of use, whilst ensuring the greatest respect for its architectural quality and historical dimension.

Since then, Kering has been opening the doors of its headquarters every year during the annual Heritage Days, giving people a chance to discover the site’s history, and also making every generation aware of the importance of preserving and valuing heritage.

About Paul Haim and his collection

The story of the garden began at the end of the 1960s, when Paul and his wife, the photographer and painter Jeanette Leroy, decided to live on the Basque coast. At the time, Paul Haim was a highly renowned art dealer in Paris, and was known for introducing Japanese audiences to impressionism and modern art. He met numerous artists, some of whom would become the couple‘s friends, such as Zao Wou-Ki and Roberto Matta. However, he also got to know Dina Vierny, a keen collector and model for Aristide Maillol, one of whose major works will be on show at the exhibition. Paul Haim was also a friend of Emile-Antoine Bourdelle’s daughter, Rhodia Bourdelle, and spent many years promoting her father’s work in Japan. The Bourdelle and Rodin exhibitions that he organized there have since become part of these artists’ history. His trips to Japan also led him to meet major figures in the world of Japanese culture, such as the great collector Shikanai Nobutaka, the owner of Fuji Television. In 1969, this art enthusiast created the Hakone Open-Air Museum which, at the suggestion of Paul Haim, features a pavilion devoted to Picasso.

Within a few years, the small farm that had attracted Paul and Jeanette Haim had grown by several hectares. As time went by, Paul Haim kept certain works for himself, placing them in the garden of La Petite Escalère. Step by step, the collection was expanded, with the addition of ever more contemporary works.

Together with Gilbert Carty, La Petite Escalère’s gardener, they set these works in what could never be called a sculpture park. Railway sleepers provide a path through an immense labyrinth lost in the middle of a bamboo grove, a vegetable garden, glades and undergrowth. There, visitors are caught by surprise at the array of sculptures by the leading artists of the 20th century.

Christie’s, the world’s leading art business, had auction sales in 2019 that totalled £4.5 billion / $5.8 billion. Christie’s is a name and place that speaks of extraordinary art, unparalleled service and international expertise. Christie’s offers around 350 auctions annually in over 80 categories, including all areas of fine and decorative arts, jewellery, photographs, collectibles, wine, and more. Prices range from $200 to over $100 million. Christie’s also has a long and successful history conducting private sales for its clients in all categories, with emphasis on Post-War & Contemporary, Impressionist & Modern, Old Masters and Jewellery.
Alongside regular sales online, Christie’s has a global presence in 46 countries, with 10 salerooms around the world including in London, New York, Paris, Geneva, Milan, Amsterdam, Dubai, Zürich, Hong Kong, and Shanghai.

A global Luxury group, Kering manages the development of a series of renowned Houses in Fashion, Leather Goods, Jewelry and Watches: Gucci, Saint Laurent, Bottega Veneta, Balenciaga, Alexander McQueen, Brioni, Boucheron, Pomsellato, DoDo, Qeelin, Ulysse Nardin, Girard-Perregaux, as well as Kering Eyewear. By placing creativity at the heart of its strategy, Kering enables its Houses to set new limits in terms of their creative expression while crafting tomorrow’s Luxury in a sustainable and responsible way. We capture these beliefs in our signature: “Empowering Imagination”. In 2019, Kering had nearly 38,000 employees and revenue of €15.9 billion.

Visits to the exhibition at Laennec, 40 rue de Sèvres, from October 15 to 22 (10.00am to 6.00pm) are by reservation only, using the online booking service Patrivia

All visitors must wear masks and are asked to maintain social distancing. The arrangements made for the exhibition will enable us to welcome you in the best possible conditions, which comply with current health guidelines. These conditions may be modified in future, should there be changes in the health regulations in force.