Submissions are now open for this year’s initiative, which advocates to combat violence against women, and will take place from 25 november – 10 december 2020.

Inspired by the UN Women campaign 16 Days of Activism Against Gender- based Violence, the 16 DAYS 16 FILMS initiative is a short film competition that focuses on filmed content addressing violence against women. 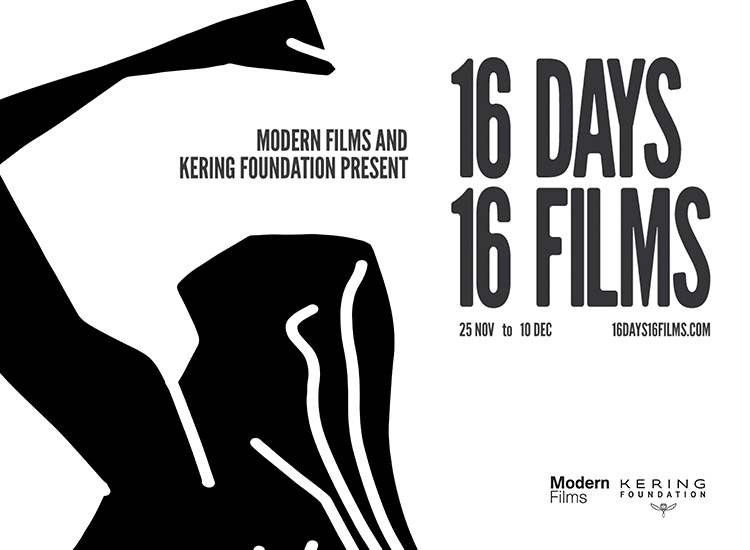 Now in its third year, the initiative will run online from 25 November to 10 December, between the International Day for Elimination of Violence Against Women and International Human Rights Day.

And for the second consecutive year, Modern Films has partnered with the Kering Foundation, which has been combating violence against women since 2008.

Together, these organisations champion female-identifying filmmakers internationally, providing a platform in which they can share stories that increase visibility about gender-based violence and in turn, create a dialogue to empower women and push for change.

16 finalists will be chosen from the UK, Ireland, France, Italy, and for the first time, from Mexico and the United States. One short film will be released each day between 25 November and 10 December on both Modern Films and the Kering Foundation online platforms, and the film will also be shared by the specialist organisation NGOs Chayn Italia in Italy, En avant toute(s) in France, Fondo Semillas in Mexico, NNEDV in the U.S and the UK Says No More campaign in the UK.

The initiative will conclude with an awards ceremony and a special event screening of all 16 films in mid-December.

An independent jury will choose the winning filmmaker and two runners up, with each of the three receiving a prize. The first-place winner will also receive the opportunity to create a new public service announcement for UK Says No More, a national campaign focused on raising awareness and preventing domestic abuse and sexual violence in the UK.

Myriam Raja’s You Are Not Alone campaign video for UK Says No More can now be viewed online here: https://www.16days16films.com/our-blog-1/youarenotalone

“We are proud to have the opportunity to bring this initiative to international audiences for the third consecutive year. With the number of global domestic abuse cases having risen dramatically in the wake of global lockdown, 16 Days 16 Films enables us to bring issues related to gender-based violence to the forefront, allowing us to further support womxn while championing female-identifying filmmakers.” Johanna von Fischer and Ginta Gelvan, Producers 16 Days 16 Films.

“The Kering Foundation is pleased to continue its partnership with Modern Films and extend the 16 Days 16 Films initiative to the United States and Mexico this year. It is essential to elevate the voices of female-identifying filmmakers in order to highlight the complexities of the violence that affects 1 out of 3 women worldwide. Through this initiative, we hope that we can mobilize more individuals towards collective action to create change.” Céline Bonnaire, Executive Director of the Kering Foundation.

Submissions from the UK, Ireland, France, Italy, Mexico and the United Sates are now open until Thursday 8 October 2020 and the 16 finalists and jury members will be announced mid-November.

Films must be 20 minutes or under, be directed by female-identifying filmmakers and speak powerfully to the many forms which gender-based violence and inequality can take.

Modern Films is a London-based, female-led film production, distribution and event cinema agency. Established by Eve Gabereau in 2017 with a mandate to work on stories that address social issues head-on through film and media content, they launched with the Event Cinema release of Manifesto starring Cate Blanchett and with Executive Production on the BAFTA-winning I am Not a Witch. They focus on A-list festival competitors, critically acclaimed titles and international award winners.

Highlights of their slate include Alice Rohrwacher’s Happy as Lazzaro, Iciar Bollain’s Yuli: The Carlos Acosta Story, documentary Shooting the Mafia by Kim Longinotto. Their 2020 slate includes Werner Herzog's Family Romance, LLC, Viggo Mortensen's The Falling and a slate of films directed by women including; THE PERFECT CANDIDATE by Haifaa al Mansour, WHITE RIOT about the Rock Against Racsim movement in the 70s, LUXOR by Zeina Durra and starring Andrea Riseborough, RAISE HELL: THE LIFE & TIMES OF MOLLLY IVINS and BEYOND THE VISIBLE by Halina Dyrschka about the artist Hilma af Klint. Modern Films also recently produced I STILL BREATHE directed by Alfred George Bailey.

The Foundation supports local survivor-centered organizations that provide comprehensive services to women, and works with younger generations, particularly young men and boys, to combat violence against women through prevention programs.The Foundation also seeks to change behaviors within Kering and in society in general. It offers training sessions on domestic violence for Kering employees and created, in 2018, alongside the FACE Foundation, “One in Three Women”, the first European network of companies engaged against gender-based violence.

About UK Says No More

En avant toute(s) is an organization working for gender equality and the end of gender-based violence, by fighting stereotypes and supporting survivors. This innovative organization created the first chat room in France, available on commentonsaime.fr, focused on responding to the needs of young people who are questioning their romantic relationships and the violence they may be experiencing in it.

About The National Network to End Domestic Violence (NNEDV)

Fondo Semillas provides economic resources, training and support to women's groups working for gender equality throughout the country. Over 30 years, it has financed 526 organizations, supporting more than 779,018 women and indirectly benefiting 2.9 million more people. In 2011, Fondo Semillas was recognized by the MacArthur Foundation's Award for Creative and Effective Organizations and in 2012 it received the Hermila Galindo Award from the Mexico City Human Rights Commission.
For more information please visit semillas.org.mx

About 16 Days of Activism

16 Days of Activism Against Gender-based Violence is an annual campaign, which has run since 1991, and has 164 countries and 3,700 organisations involved. It uses the 16 days between International Day for the Elimination of Violence Against Women (25th November) and International Human Rights Day
(10th December) to reinforce that eliminating all forms of violence against women is a human rights issue, and that the act of perpetrating violence against women is a human rights violation.