The Kering Foundation, in partnership with NAESV and NNEDV, extends training program to prevent and combat violence against women in the US 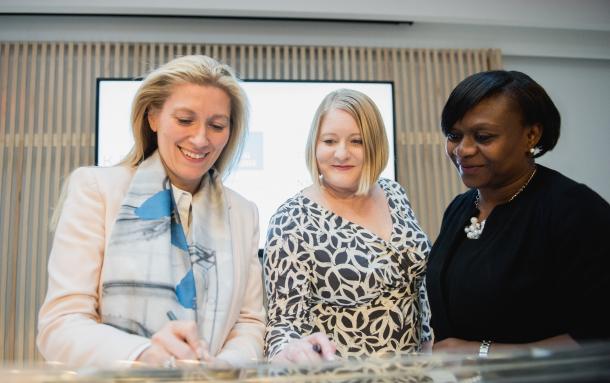 ∞ The Kering Corporate Foundation, the National Alliance to End Sexual Violence (NAESV) and the National Network to End Domestic Violence (NNEDV) partner to develop an employee training program that seeks to combat sexual and domestic violence

∞ Following the successful rollout of similar training partnerships in France, Italy and the UK, the Kering Foundation now extends its program to the US

Employees as advocates
The Kering Foundation, the National Alliance to End Sexual Violence (NAESV) and the National Network to End Domestic Violence (NNEDV) have joined forces to raise awareness about violence against women, an issue that touches all societal classes, and enable Kering employees to become advocates for its prevention. The partnership will be officially launched by Marie-Claire Daveu, Kering’s Chief Sustainability Officer and Head of International Institutional Affairs; Monika Johnson Hostler, President of NAESV; and Cindy Southworth, Executive Vice President of NNEDV in New York today, June 6.

Under the partnership, the three organizations have developed a training program for all 1,200US-based employees of Kering Corporate and the Group’s luxury Maisons. The program provides teams with correct know-how to intervene should they encounter these situations, in either their personal or professional lives. A particular focus is placed on understanding violence against women; recognizing and breaking down stereotypes; creating a supportive work environment for survivors; and discussing available support services. Critical to the program is the local expertise provided by NAESV and NNEDV who, during their combined forty-five years of experience, have primarily worked on advising policymakers and educating the general public.

Regional partners combat global issue
This new partnership marks the continued rollout of the Kering Foundation’s training program across Kering’s key operating regions, with the first US-based training sessions having already taken place. Worldwide, a total of over 500 employees have received training thanks to similar partnerships already established under the Kering Foundation’s “Charter to Combat and Prevent Domestic Violence” training program. The first of such Charters was signed in France in 2010 with the NGO Fédération Nationale Solidarité Femmes (FNSF), the second in Italy in 2013 with Donne in Rete contro la violenza (D.i.Re); and most recently in the UK in 2015 with Women’s Aid.

Whilst this is the Kering Foundation’s first anti-domestic violence focused partnership in the US, two anti-sexual violence partnerships have been in place since 2015; with We End Violence to run online prevention training programs, and with It’s on Us to address the issue of sexual assault on college campuses.

“When one considers that up to 60% of victims in the US lose their job due to reasons stemming from domestic violence each year, we cannot but take action. The workplace can provide an escape and a means of financial independence for those experiencing violence; a support system we hope to further reinforce through the Kering Foundation’s new partnership with NAESV and NNEDV. In providing our Group’s employees with the support they require to support others, I hope we can build on the momentum of positive change taking place worldwide.” said François-Henri Pinault, Chairman and CEO of Kering and President of the Kering Corporate Foundation.

Cindy Southworth, Executive Vice President of NNEDV said “Domestic violence is an epidemic that must end. This program is an innovative, effective way to ensure that employees have the tools they need to combat domestic violence. NNEDV applauds the Kering Foundation for taking a stand to end abuse and help us create a world in which violence against women no longer exists.”

Monika Johnson Hostler, President of NAESV said “More companies should follow the bold lead of the Kering Corporation in helping end sexual violence. It is crucial that survivors have all the resources they need to live lives free from violence, and creating a safe work environment is a huge component of this. We look forward to this continued partnership with NNEDV and the Kering Foundation.”

Violence against women in the US

∞ Every 9 seconds, a woman is sexually assaulted or beaten in the US

∞ 1 in 3 women in the US have experienced rape, physical violence, or stalking by a partner

∞ US women lose approximately $727 million of their wages each year due to domestic violence reasons, due to the 80 million days of unpaid leave they are forced to take