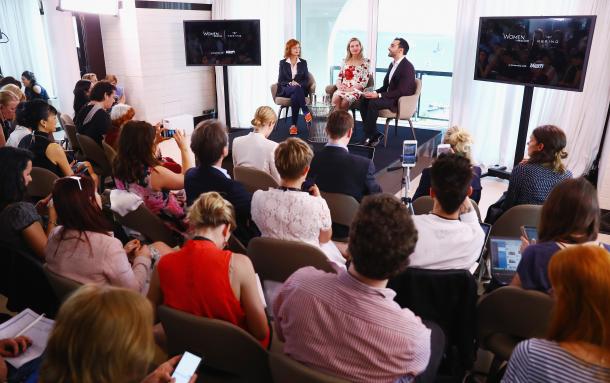 ∞ Organised by Kering and the Festival de Cannes for the second year running, the ‘Women in Motion’ programme brought together a large number of film industry figures over ten days to discuss the issue of women in cinema. Exploring subjects such as representation, visibility, contribution, wage inequality, funding difficulties and potential solutions, a great number of topics were discussed at the 2016 ‘Women in Motion’ Talks, which welcomed more than 500 guests.

∞ The highlights of the programme included the ‘Women in Motion Awards’, which were presented to actresses Geena Davis and Susan Sarandon, who had travelled to Cannes to mark the 25th anniversary of cult film Thelma & Louise, as well as to three young female directors: Leyla Bouzid, Gaya Jiji and Ida Panahandeh.

The Women in Motion Talks: from awareness to action

In keeping with the 2015 event, this year the ‘Women in Motion Talks’ united close to 30 film industry figures, who were invited to share their opinions on the issue of women in cinema. Organised by Kering and the Festival de Cannes in partnership with Variety, the Figaro Group (Le Figaro, Madame Figaro, lefigaro.fr) and ELLE China, the Talks attracted more than 500 industry professionals, corporate representatives and journalists from 12 to 19 May 2016. In addition to the guests who were at Cannes for the 69th film festival, the ‘Women in Motion Talks’ also featured speakers who have long been committed to fighting women’s causes, in film and beyond, in order to discuss potential solutions for improving the representation of women in the industry. Once again, one of the main topics of discussion was the funding obstacles faced by films that are either directed by women or about women. Meanwhile, some of the potential solutions evoked included developing female production companies, improving school curriculums to incorporate more iconic female film figures, the importance of aiming for equality upstream of hiring processes as well as the opportunities available to directors today through new forms of technology and televised series, notably the streaming services that are particularly popular among millennials.

• Actress, film director and producer Jodie Foster opened the 2016 edition of the ‘Women in Motion Talks’. In Cannes to present her film Money Monster (out of competition), Jodie Foster discussed the evolution of her own career, which has been marked by an increasingly strong presence of women on film sets, as well as the lack of funding given to women for their productions.

“I think studio executives are scared, period. (…) It’s a financial issue honestly; it’s where art and commerce are coming together, and commerce is winning.”

“Anyone in a position to hire should be looking at 50% of people they interview as women.” Celine Rattray

• The We Do It Together team, who were in Cannes to present their first film Together Now, were guest speakers at the ‘Women in Motion Talks’. Founder Chiara Tilesi, actress Juliette Binoche, producer Marianne Slot and director Patricia Riggen, all members of the organisation’s executive board, stressed the importance of projects such as theirs, which advocate a sharing economy so that more films directed by women and about women can be produced for the largest audience possible, thus helping to transform the perception and situation of women around the world in the long term.

• During their Talk, Geena Davis and Susan Sarandon, the iconic stars of cult film Thelma & Louise, addressed the impact that films have on individuals in terms of identification and on society in general, as well as on perceptions that are considered to be the norm. In regard to that, Susan Sarandon expressed her delight at the current interest being shown in definitions of gender and identity, which she considers to be a step forward towards redefining the limitations that are commonly imposed on both men and women.

Geena Davis then explained, "Research from my Institute show that women doing something makes it familiar, makes it something women want to aspire to and that men can accept more (…). Images have a tremendous impact.”

• At a Talk hosted by the Managing Director of UniFrance Films Isabelle Giordano, scriptwriter and director Alice Winocour and director Houda Benyamina, who was awarded the Caméra d’Or for Divines, discussed the depiction of women in film, the myths surrounding female and mother figures, and the narrative outlines that result from them. The importance of family, the difficulty of combining family life with professional ambitions, the extreme reluctance of women to discuss family and professional issues in comparison to men, and the need for better solidarity between women were just some of the many topics that came up for review.

• Looking at the specificities of the Chinese market regarding film, Kering and the Festival de Cannes, in partnership with ELLE China, invited Ge Wei, Vice President of the Chinese leading online video platform Youku, to address the business opportunities for women thanks to the Internet. At a Talk hosted by Lena Yang, CEO of Hearst Magazines China, she presented the successful career of a young Chinese women, ex-model, now content producer and entrepreneur thanks to the Internet. Additionally, during a private session, ELLE China interviewed the Chinese actress Chris Lee about her career and the importance of female characters on screen.

• At a Talk held with Amy Emmerich, Content Officer at Refinery29, an American online content platform aimed at women and Chloë Sevigny, actress, director, former model and stylist, Sevigny highlighted the personal difficulties she faced – notably a lack of self-confidence and a feeling of intimidation – that prevented her from directing sooner. Through their respective careers in fashion and the media, the two speakers also insisted upon the need to establish new, more diverse ideals of beauty to enable more women to identify with content, particularly in women’s magazines.

“My insecurities mostly [prevented me from directing sooner] (…). I kept working and working with bigger directors, more important directors, real artists, and then I started to get really intimidated by the process. It’s just my own psychological journey, how I felt about myself, my confidence in myself, whether or not I could pull it off, whether or not I could pitch something, sell an idea to someone... Just communicating with people on set was a real fear for me” Chloë Sevigny

Amy Emmerich added, “I can tell you, based on the audience that we have, that they want it, they’re yearning for it. They want a story that is told through a different lens, a more diverse story that eventually speaks to the community and the environment in which they live. And that doesn’t always happen if it’s just a white man behind the camera”

• One of the Talks organised with the Kering Foundation, which combats violence against women, brought together the actress, director and producer Salma Hayek Pinault, who also sits on the executive board of the Kering Foundation, the director, producer and scriptwriter Lisa Azuelos, the CEO of the Hong Kong Women’s Foundation Su-Mei Thompson, and Zainab Salbi, President of the Women for Women organisation and creator and presenter of the television programme the Nida’a Show. All long-standing activists of women’s causes, the speakers discussed their own convictions and their most recent projects to explain how film, the media and the entertainment industry can reinforce the impact their commitment has and help to improve the lives of women around the world.

• The last Talk of this year’s edition put the spotlight on two women who are also committed to fighting for a more balanced representation of women in the film industry: Francine Raveney, Head of Research, press and public relations for EWA – European Women’s Audiovisual Network, and Melissa Silverstein, writer, founder of the Women in Hollywood platform, Artistic Director and co-founder of the Athena Film Festival in New York.

Francine Raveney lamented, “There are 44% of female directing students. When it came to getting a job in the industry and being an active director the figure drops to 24%.”

“It’s not only about equal pay, it’s about trusting the vision of women (…) it’s about making it clear we’re half the world! Our stories matter and we count”.

Melissa Silverstein added “When you think of a film director, you think of a guy, with a hat (…) that is the definition of leadership. So what we need to do is making people understand that we need to change to definition of what leadership is so that we can have more people understand that women can lead in the same way as men.”

The Women in Motion Awards: a dinner held in honour of women

Having travelled to Cannes to mark the 25th anniversary of cult film Thelma & Louise, actresses Geena Davis and Susan Sarandon were presented with their ‘Women in Motion Awards’ by Pierre Lescure, Thierry Frémaux and François-Henri Pinault.

François-Henri Pinault, Chairman and CEO of Kering stated, “Our partnership with the Festival is designed to give a louder voice to women in an industry that massively influences the way people think and behave every day.”

Inviting Geena Davis and Susan Sarandon on stage, Thierry Frémaux, General Delegate of the Festival de Cannes, emphasised: “They are part of the legend of this festival because the reception that was given to Thelma & Louise is one of the most memorable and extraordinary. The walls of this palace still remember it.”

As part of the ‘Women in Motion’ programme, Geena Davis and Susan Sarandon, as role models for their exemplary careers and commitment to social issues, chose to present the Women in Motion Young Talent award to three young film directors: Leyla Bouzid, Gaya Jiji and Ida Panahandeh.