I don’t speak hater. Do you? 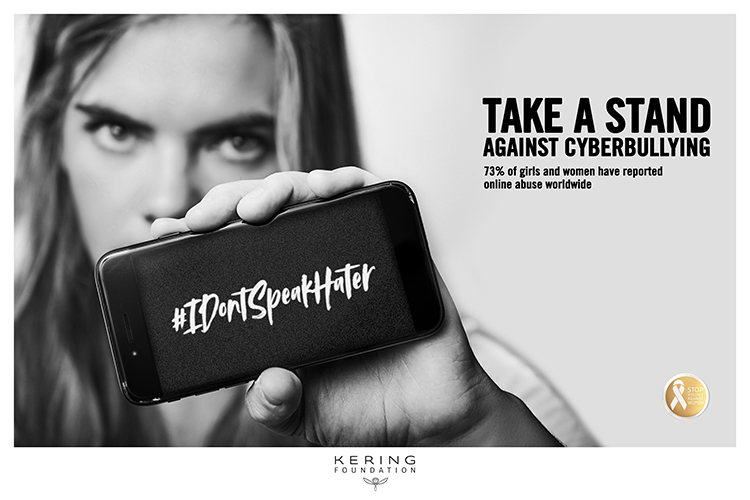 Worldwide, women are 27 times more likely to be bullied online than men.  Equally impactful as real-life bullying,  gender-based online abuse is a global pandemic, intimidating and silencing the voices of girls and women in the digital space. For its 7th annual White Ribbon for Women campaign, the Kering Foundation launches a global call-to-action against cyberbullying.

Running from November 16th to 30th, the campaign is designed particularly to educate Generation Z, the first generation spending much of their lives online, in bystander intervention. This generation, of those born from 1995 onwards, is highly impacted by cyberbullying - approximately half of young people have been bullied online. 1 in 4 has had it happen more than once.

Via #IDontSpeakHater and IDontSpeakHater.org, the Kering Foundation calls on this young generation to defend their peers from online harassment. Instead of staying silent according to the prevailing wisdom “don’t feed the trolls”, when women and men see an insulting comment online, the campaign encourages them to support the person attacked by translating the hate into something empowering. By reformulating insults with a new meaning like auto-predict or auto-correct using wit or humor, the bystander rejects the original offensive comment in a bid to break the chain of hate.

Simultaneously, to mark the 10th anniversary of the Kering Foundation, founded in 2008 to combat the violence that impacts one in three girls and women worldwide, for the first time, all of the Group’s brands will unite to raise funds to combat violence against women during the White Ribbon for Women 2018. Each brand will donate 10% of the retail price of a selected product or product line, to local programs supported by the Kering Foundation.

#IDontSpeakHater will launch on social media starting in the seven key countries  where the Kering Foundation actively works to combat violence.  The campaign will call on a WhiteRibbonSquad of influencers to relay the call to young people worldwide to break the chain of hate, challenge the online pack mentality and encourage meaningful change in language, mindsets and behaviors.

Further to drawing attention to the issue of online abuse for Generation Z and its disproportionate targeting of girls and women for being female online, the campaign aims to drive awareness of the psychological harm of cyberbullying. To the stress, trauma, anxiety, depression, sleep issues and physical pain which, like bullying in real life, are the damaging consequences of being a target of online abuse.

François-Henri Pinault, Chairman & CEO of Kering, and Chairman of the Kering Foundation, said of the #IDontSpeakHater launch: “Everyone has the right to feel safe online. We must take a stand against the pervasive abuse that seeks to intimidate and silence female voices. I am proud to unite all the Kering Group’s brands to support our White Ribbon for Women 2018 campaign and raise funds to combat violence against women. Together let’s take a stand against online hate speech.”

Created in 2008, the Kering Corporate Foundation combats Violence Against Women. To strengthen its global impact, the Foundation focuses on one cause in each of the following three regions: Sexual Violence in the Americas; Harmful Traditional Practices in Western Europe (France, Italy, United Kingdom); Domestic Violence in Asia. In addition, it pays particular attention to the situation of migrant and refugee women. The Kering Foundation supports NGOs’ projects, social entrepreneurs and awareness campaigns while involving the Group’s 29,000 employees.

About White Ribbon for Women

Launched in 1991, the White Ribbon movement commenced following the Montreal Massacre where a male student of École Polytechnique University massacred 14 of his female classmates telling them "you have no right being here (in education)." It encourages the promotion of gender equality, healthy relationships and a new vision of masculinity in order to bring about a cultural shift to a future without violence against women. In 1999, the United Nations declared 25 November the International Day for the Elimination of Violence against Women, with a White Ribbon as its symbol. In 2012, the Kering Foundation launched its own White Ribbon For Women campaign, with board director Stella McCartney redesigning the White Ribbon, in order to bring further attention to the cause.