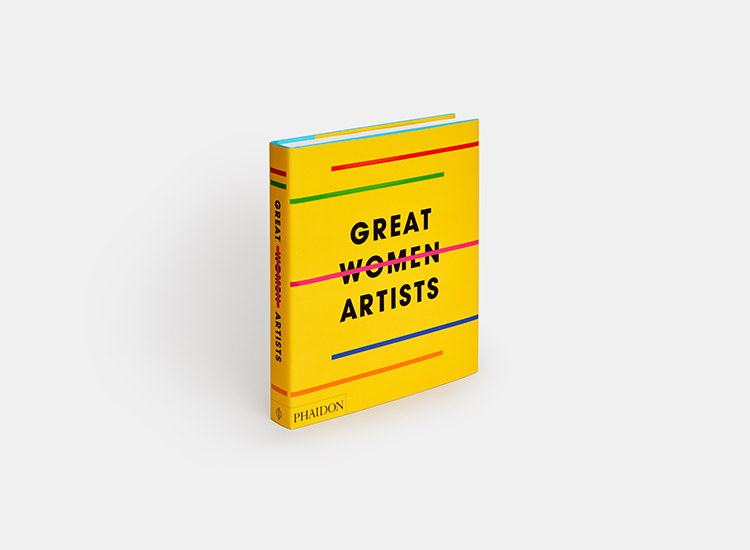 Kering, through its Women In Motion program, is partnering with the creative arts publisher Phaidon and its sister company Artspace, a leading online marketplace, to launch the new book Great Women Artists.

On October 2nd, 2019, Phaidon will publish  Great Women Artists an extensive illustrated book on women artists that reflects an era where art made by women is more prominent than ever. The book tells the stories of over 400 artists spanning 500 years and reveals a parallel yet equally engaging history of art for an age that champions a great diversity of voices.

Through this partnership with Phaidon, Kering is strengthening its commitment to women in the arts. A major priority for the Group, Kering’s support of the empowerment of women extends into the world of arts and culture through the Women In Motion program. Since its creation in 2015, Women In Motion has highlighted the creativity and uniqueness of talented women whose work in the fields of arts and culture, is helping to transform our vision of the world. This support also manifests through the Kering Foundation which has been combating violence against women worldwide for over 10 years.

In celebration of Great Women Artists and with the support of Kering, Phaidon and Artspace will launch a charitable portfolio of limited-edition prints to benefit one of the Kering Foundation’s partners: the non-profit Promundo-US, a leading organization in promoting gender justice, preventing violence against women by engaging boys and men as partners with women and girls.

The funds raised by Phaidon and Artspace, will support the launch of a Boyhood Campaign and Initiative co-developed by Promundo and the Kering Foundation, alongside other partners, including those focused on girls’ empowerment. The Boyhood Campaign and Initiative will shift the media and social narrative around manhood and boyhood in the US and globally, and will support parents, educators, coaches, and media makers with the resources they need to raise, teach, coach, and set an example for boys to become equitable and connected men. This will begin in the US with future expansion to other countries.

The limited portfolio of prints was commissioned exclusively for this project and features six artists and six unique prints, each in an edition of 100. Cecily Brown, Lubaina Himid, Bharti Kher, Catherine Opie, Jenny Saville, and Dana Schutz have contributed to the portfolio, which seeks to raise close to $1 million for Promundo. Prints by these contemporary artists are scarcely available, and this well-rounded portfolio offers collectors the opportunity to acquire works at an accessible price while supporting a worthy cause.

The portfolio retails for $9,000 for the suite of six, and $1,500 for an individual print. The prints will be made available for sale beginning on October 2nd exclusively on artspace.com/greatwomenartists.

In addition, Kering, Phaidon and Artspace will host will host a number of public and private events, including a dinner and panel discussion in New York. A special video series featuring interviews of artists Maya Lin and Pat Steir in their studios will be produced and launched in conjunction with the partnership.

Kering, a partner of the Festival de Cannes, launched Women In Motion in 2015 to shine a light on women’s contribution to cinema, both in front of and behind the camera. Since then, the program has been expanded to include the worlds of photography, arts and literature. For although creativity is one of the most powerful forces for change, gender inequality in this areas remains flagrant.  Through its awards, Women In Motion recognizes both inspirational figures and talented young women, while its Talks provide an opportunity for some of the leading names in cinema and arts to share their views on women’s representation in their profession. For the past five years, Women In Motion has been a platform for helping to change mindsets and to providing thought leadership on both the role and the recognition given to women in all areas of the arts.

Since 2008, the Kering Foundation combats this violence that affects all cultures and all social classes. To maximize its impact, the Foundation works hand in hand with a limited number of local partners in the three main regions where the Group operates: the American continent, Western Europe and Asia.
The Foundation supports local survivor-centered organizations that provide comprehensive services to women, and, since 2018, has begun working with younger generations, particularly young men and boys, to combat violence against women through prevention programs like Promundo in the United States and Gendes in Mexico.
The Foundation also seeks to change behaviors within Kering and in society in general. It offers training sessions on domestic violence for Kering employees and created, in 2018, alongside the FACE Foundation, “One in Three Women”, the first European network of companies engaged against gender-based violence. The Foundation also organizes international awareness campaigns (White Ribbon For Women, on the occasion of the International Day for the Elimination of Violence Against Women), all the while involving Kering’s 35,000 employees worldwide.

Phaidon is the premier global publisher of the creative arts with over 1,500 titles in print. They work with the world’s most influential artists, chefs, writers, and thinkers to produce innovative books on art, photography, design, architecture, fashion, food and travel, and illustrated books for children. Phaidon is headquartered in London and New York City.

Artspace.com is the leading online marketplace for contemporary art and ideas, offering both established and aspiring collectors the opportunity to discover, learn about, and purchase exceptional artworks at the click of a button. Partnering with leading artists, galleries, museums, and cultural institutions worldwide to curate the finest selection of art for sale online, they provide detailed and transparent information on every artist and work.

Promundo, whose name means “for the world,” was founded in 1997 in Brazil with the belief that gender equality is a social “good” for the world, and that overcoming gender inequalities and patriarchy and advancing gender justice is necessary for women, men, children, and individuals of all gender identities. Promundo works globally to work with men and boys – as partners with women, girls and other gender identities – to put an end to gender-based discrimination.