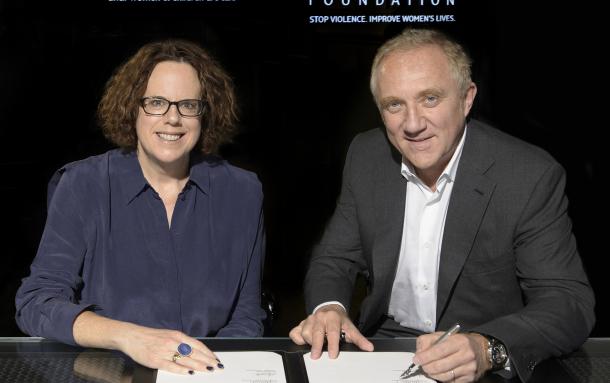 ∞ Following similar charters signed in France and Italy, the Kering Foundation now commits to roll out training programmes across all Kering brands in the UK, another one of its key areas of action

Raising awareness amongst Kering employees in the UK
The Charter will engage 1,260 UK-based Kering employees in a two-year programme to combat domestic violence against women. François-Henri Pinault, Chairman and CEO of Kering and President of the Kering Foundation, and Polly Neate, Chief Executive of Women’s Aid, jointly signed the new Charter in London.

The “Charter to combat and prevent domestic violence” is intended to raise awareness amongst UK-based Kering employees of this issue that affects all social classes, and to enable them to become advocates for its prevention:

∞ A training programme will be developed by Women’s Aid and the Kering Foundation. Employees identified as “ambassadors” will hence be able to support and refer potential victims to Women’s Aid, should they encounter situations of domestic violence in their personal or professional lives.

∞ Internal policies and guidelines on domestic violence will be developed where none exist, to be used by all employees following the training.

∞ The Charter and training programme will include all employees, at Kering Corporate and across the Group’s brands, who are based in the UK.

Building a network of partners in Kering’s operating regions
This new partnership with Women’s Aid continues the Kering Foundation’s global commitment, following two similar partnerships that have already been established; the first was signed in France in 2010 with the charity Fédération Nationale Solidarité Femmes (FNSF), and the second was signed in Italy in 2013 with Donne in Rete contro la violenza (D.i.Re). To date approximately 400 employees have received training thanks to the programmes in France and Italy.

“Upon signing the charters with Fédération Nationale Solidarité Femmes and Donne in Rete contro la violenza, we committed to extending such actions across our key operating regions around the world. Today I am very proud that the Kering Foundation is continuing this commitment, by joining forces with Women’s Aid. Through this collaboration, the Kering Foundation opens Kering’s doors to Women’s Aid who will support us in making our employees ambassadors for domestic violence awareness - which is crucial in our combat to bring an end to violence against women.” said François-Henri Pinault, Chairman and CEO of Kering and President of the Kering Corporate Foundation.

Key statistics: Violence against women in the UK

∞ 1 in 5 working women in the UK take medical leave due to domestic violence reasons each year. 20% of these women have been absent from work for more than one month.

∞ 1 in 10 victims of domestic violence choose to confide in a manager or workplace colleague.

∞ 2 women are killed every week in England and Wales by a current or former partner.

∞ Only 35% of women who experience domestic violence report this to the police.

About The Kering Foundation
Launched in 2009, the Kering Foundation combats violence against women by supporting NGOs and social entrepreneurs, and increasing awareness of the issue. It encourages employee engagement across Americas, Europe and Asia. Since it was founded, more than 140,000 women have benefited from the support of the Foundation. www.keringfoundation.org @KeringForWomen

About Women’s Aid
Women’s Aid is the national charity for women and children working to end domestic abuse. We empower survivors by keeping their voices at the heart of our work, listening and responding to their needs. We are a federation of 250 organisations who provide lifesaving services to women and children across the country. We provide expert training, qualifications and consultancy to a range of agencies and professionals working with survivors or commissioning domestic abuse services, and award a National Quality Mark for services which meet our quality standards. Our campaigns achieve change in policy, practice and awareness, encouraging healthy relationships and helping to build a future where domestic abuse is no longer tolerated. The 24 Hour National Domestic Violence Helpline on 0808 2000 247 (run in partnership with Refuge) and our range of online services, which include the Survivors’ Forum, help hundreds of thousands of women and children every year.