Broadcast in full on France.tv starting March 7th and daily on France 5 as of March 9th 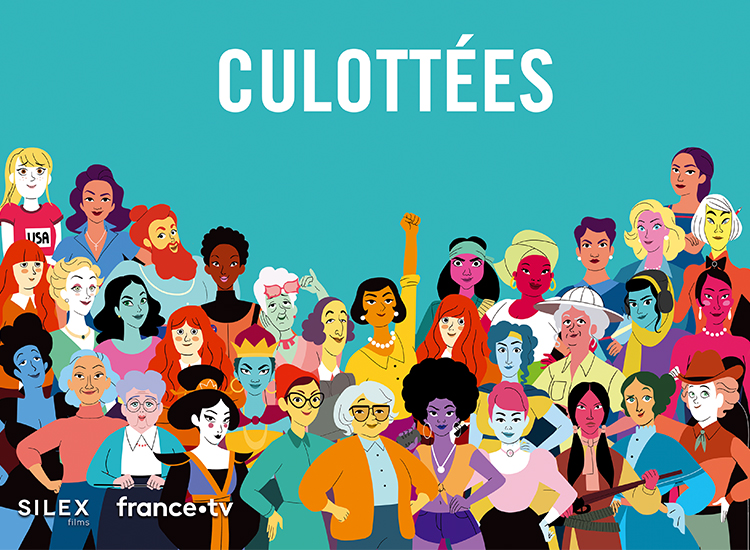 From its support of Women In Motion through to the launch and adaptation of the animated series of “Brazen”, Kering remains firmly committed to women in all the creative fields and supports those who wish to change things and raise the profile of women through the choices they have made, their careers, and their view of the world. Whether it is the illustrator and comic designer of “Brazen”, the directors, the producers or of course the heroines themselves: all are actors of the change advocated for by Women In Motion. By shining a light on the creativity and uniqueness of talented women whose work in the fields of arts and culture is helping to transform our vision of the world.

“Brazen” is the comic created by Pénélope Bagieu, showcasing the stories of 30 women, some of whom are famous, who have contributed to change History. The women portrayed have stood up for women’s rights, taking a courageous stand in times of hardship. Bagieu skillfully and wittily recounts their stories.

The animated series of “Brazen”, produced by Silex Films, an independent film company run by Priscilla Bertin and Judith Nora, takes the same approach. It is a story of admiration for these 30 women; an admiration shared and passed on by Pénélope Bagieu, the series’ directors, Mai Nguyen and Charlotte Cambon, and screenwriters, Emilie Valentin and Elise Benroubi. The success of their work lies in their ability to strike a balance between being playful and poetic whilst adding a dash of humor within the gaps of the 30-episode long story. Actress Cécile de France, leant her vocal talents to all characters in the animated series including our heroines, men, and children. “Brazen” will be broadcast in full on France.tv on March 8th, International Women’s Day. It will receive support from a teaser trailer aired all channels of France Télévisions on Saturday 7th and Sunday 8th March. The series will then receive daily airtime starting March 9th, from Monday to Friday, on France 5 until April 17th.

About “Culottées” (“Brazen”)
The series “Brazen” is a full 2D animated adaptation of 30 episodes, each lasting 3 minutes and 30 seconds, of Pénélope Bagieu’s web comic published in Le Monde and edited by Gallimard in 2016-2017. The comic has been translated into 17 languages and published in more than 21 countries. More than 550,000 copies of the comic have already been sold worldwide. The work portrays a broad spectrum of women, from an Apache warrior and a Hollywood star to a lighthouse keeper and troll creator, through to a gynecologist and empress, a rock star and bearded women, an athlete, a shaman, an explorer and an astronaut. The lives of well-known women are also explored, including: Hedy Lamarr, Hollywood actress and producer and most importantly, inventor of the technology that gave birth to WiFi; Annette Kellerman, the extraordinary swimmer and inventor of the modern one-piece bathing suit, and not to forget Leymah Gbowee, the Liberian peace activist and Nobel Peace Prize winner. In “Brazen”, women are joined together under one common denominator: changing their own lives through their own actions, and in turn, changing the times and societies in which they live. Through their boldness, determination and strength of character, these women have broken prejudices and shattered barriers. They have rocked the world, daring to do as they please. For this reason, they are rebel ladies and so “Brazen”!

About SILEX FILMS - www.silexfilms.com
SILEX FILMS is an independent film production company founded in 2009 and run by Priscilla Bertin and Judith Nora. It produces features and series, dramas and creative documentaries. The SILEX ANIMATION 2D studio was set up in Angoulême during production of the series “Les Aventuriers de l’art moderne” (“The Adventurers of Modern Art”) (6x52’ series, on the ARTE channel) in 2014. Silex has produced several features. Among them, the sketch show, “Connasse, Princesse des Cœurs” (“The Parisian Bitch, Princess of hearts”), co-produced with LGM Cinéma and Gaumont and starring Camille Cottin. And more recently, “Le Vent Tourne” (“With the wind”), directed by Bettina Oberli, starring Mélanie Thierry and Pierre Deladonchamps, produced by ARP Sélection and sold internationally by Be For Films. The feature received the Variety Piazza Grande Award at the 2018 edition of the Locarno Film Festival. Silex is currently co-producing Aurélie Saada’s first feature, “Rosa”, with Germaine Films. On March 13, 2020, the first season of the series “Stalk” (10x23’) will be broadcasted. The drama, which is directed by Simon Bouisson will be available in full on France.tv Slash. In 2019, the series garnered several major prizes at the Festival de la Fiction TV (TV Drama Festival) in La Rochelle.

About Kering
A global Luxury group, Kering manages the development of a series of renowned Houses in Fashion, Leather Goods, Jewelry and Watches: Gucci, Saint Laurent, Bottega Veneta, Balenciaga, Alexander McQueen, Brioni, Boucheron, Pomellato, Dodo, Qeelin, Ulysse Nardin, Girard-Perregaux, as well as Kering Eyewear. By placing creativity at the heart of its strategy, Kering enables its Houses to set new limits in terms of their creative expression while crafting tomorrow's Luxury in a sustainable and responsible way.  We capture these beliefs in our signature: “Empowering Imagination.”